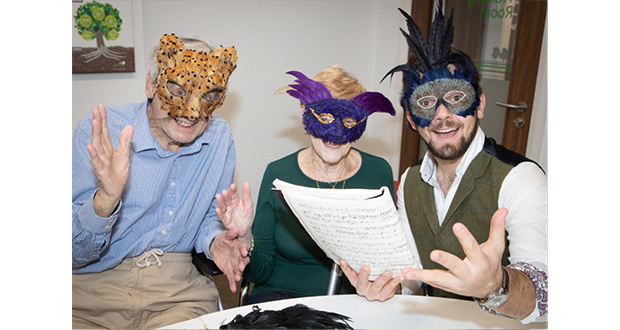 Residents at care village Belong Morris Feinmann in Didsbury were treated to a series of opera workshops from SoundUp Arts, a community music service in association with the Royal Northern College of Music (RNCM), whose aim is to engage, enrich and entertain people, including those living with dementia, through the power of music.

The weekly workshops saw RNCM opera students, who are currently working on a production of Puccini’s comic masterpiece ‘Gianni Schicchi’, engage with residents through multi-sensory activities to explore themes and share the joys of opera. Weekly sing-a-longs and handlings of costumes, props and instruments were led by the performers to explore sensory and cognitive responses, which had very positive results among participants.

One 88-year-old resident, Pearl Gruber, was especially full of praise: “I have loved opera all my life, and listening to the live performances by such a talented group of musicians fills me with joy. How wonderful to have had this opportunity here at our village!” Another resident, 94-year-old Doris Angel, shared Pearl’s enthusiasm: “The singers were absolutely mesmerising; everyone in the room was smiling”.

Angela Luckett, experience coordinator at Belong Morris Feinmann, said: “Having SoundUp here has really proved the power of music in stirring emotional and physical responses in our residents. Whether they’re up dancing or tapping their feet from where they’re sitting, the whole group is connected through the music. A big thank you must go to Lucy and the team for sharing their talents with us.”

Founder of SoundUp and former student at the RNCM, Lucy Temby is the Junior Fellow in Learning and Participation and a Dementia Friends Champion, which allowed her to carry out dementia awareness training with the student volunteers prior to the workshops. She said, “I am so proud of the positive feedback and appreciation expressed by the residents, volunteers and staff at Belong Morris Feinmann.” Following the workshops, residents from the care village have been invited to attend a performance of ‘Gianni Schicchi’ at the RNCM in early December.