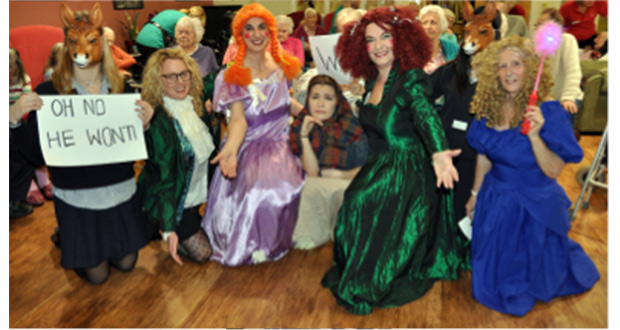 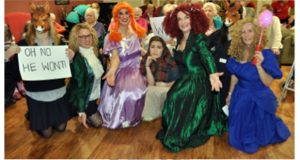 A pantomime-themed activity for care home residents was transformed into a full scale production with the help of local theatre groups and students.

Colten Care dedicated dementia home Fernhill in Ferndown, had a packed house for its interpretation of Cinderella.

Colten Companion Ann-Marie Knight explained: “It all started out as a small panto-themed activity for one of our home groups. But then some staff suggested being involved, so I contacted Ferndown Phoenix Musical Society for their advice.

“They are active charity supporters and perform concerts, plays and panto at the Barrington Theatre in Ferndown. They also visit us at Christmas time to sing carols, which our residents love.

“They were very encouraging and also directed me to the Barrington and the theatre’s concert secretary Janet Barrow, who offered to lend us some costumes.

“We couldn’t believe it when they arrived. They were amazing and really added authenticity to the production.”

The narrator was Companion Heather Almond.

The cast was also joined by three students from Canford School who visit Fernhill for work experience on Mondays; Charlie Berridge was in charge of the show’s music while Rachel Ko and Daisy Bartlett played horses.

Also in the audience were residents from Fernhill’s sister Home, The Aldbury in Poole.

Ann Marie continued: “We wanted the panto to be as interactive as possible, so there were plenty of signs urging the audience to boo or shout their encouragement – and they certainly did!

“The five residents from The Aldbury joined with us for a spot of scarf dancing in the morning and lunch, before the panto itself.

“It just goes to show what you can arrange with a little community help and it was such a success I think we may aim to repeat it again next year.”