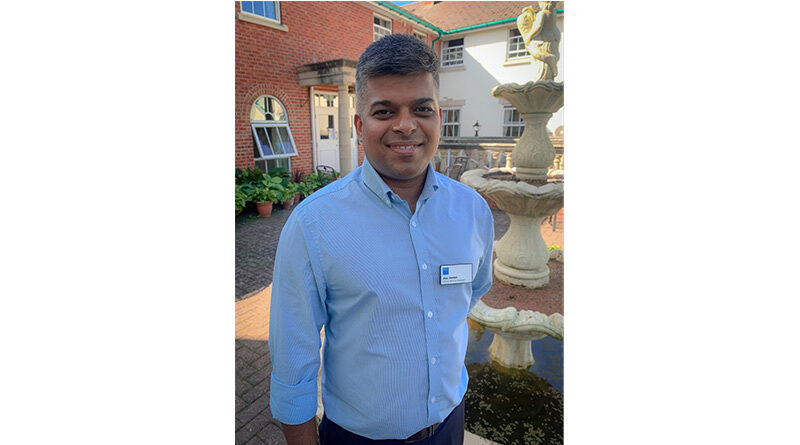 A clinical service manager from a West Midlands care home has been awarded an honorary British Empire Medal by Her Majesty The Queen, recognising his services to residents, families and colleagues during the pandemic.

Aby Joseph has worked at Bupa for nine years, joining as a newly qualified nurse. For the past two years he has been with Bupa’s Alveston Leys care home in Stratford-Upon-Avon, where he is Clinical Services Manager. He also stepped up to manage the home, while the Home Manager was on maternity leave.

Aby was nominated for the award for going above and beyond to provide care and selfless support to residents and colleagues.

Aby has a young family, though voluntarily moved into the home to provide round-the-clock support for residents and his peers. He also helped residents stay connected with their families, reassuring them that their loved one was safe and well in the home.

The award makes Aby the seventh Bupa colleague to receive recognition in the Queen’s honours, due to their efforts during the pandemic – more than any other provider. In October 2020, four colleagues received British Empire Medals, with a further two announced in the Queen’s New Year’s Honours list on 1 January 2021.

Congratulating Aby on his achievement Rebecca Pearson, General Manager for Bupa Care Services, said: “Aby is a fantastic colleague and we’re all incredibly proud of him for receiving this honour. It’s well deserved and testament to his efforts everyday to make the people around him smile, even in the most challenging of times.”

Nicola French, Home Manager at Bupa’s Alveston Leys added: “At only 35, Aby shows skill, compassion and empathy that would take people a lifetime to learn. He is a shining example of someone who genuinely has others’ best interests at heart. The past year has been exceptionally challenging, and I can’t imagine where we’d be without him.”

The residents at Aby’s care home are also delighted that Aby has received the award. John Bellinger commented: “The dedicated hard work Aby has put in is hugely appreciated. I was very well looked after when I had COVID-19, so many congratulations to Aby for receiving this award.”