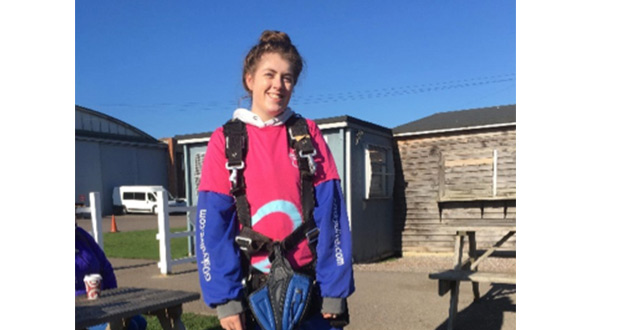 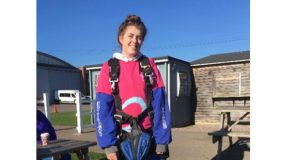 A waitress at a Bournemouth care home jumped 15,000 feet from a plane in aid of Alzheimer’s UK.

Grace Nicholls, 19, a weekend waitress at Colten Care’s Amberwood House in Ferndown, was in freefall for a full minute, plummeting at 125 miles per hour towards the earth.

The tandem jump – part of the Alzheimer Society’s national, Big Leap event – raised £561, and far from putting her off daring deeds, has now spurred Grace on to try a charity wing walk.

She said: “I loved every minute of the sky dive, from the rush I got jumping from the plane, to seeing the fantastic views as we came down.

“When the parachute eventually deployed we even did some spins and tricks which was amazing.”

Grace took part in the event in memory of her late grandmother who suffered from dementia.

She said:  “I wanted to do something special in my Nan’s memory, which would also help other dementia sufferers. I know she would have been very impressed and proud by the thought of me jumping out of a plane.

“When I told the residents at Amberwood House what I was doing they were also pretty amazed and asked me lots of questions. They all wanted to know how I was going to be trained and why I was doing it. It was a real talking point and along with my friends and family, many of them sponsored me too.”

Grace made her jump at Old Sarum Airfield, near Salisbury, Wiltshire, and was watched by her parents and her partner, while the residents of Amberwood House received regular updates on her progress from staff.

She added: “I was really pleased when Colten Care agreed to donate £200 to my sponsorship fund too, making my total £761.

“I’ve definitely caught the bug where daring sports are concerned and am now looking into wing walking or maybe paragliding for my next challenge, as I enjoyed it so much.”