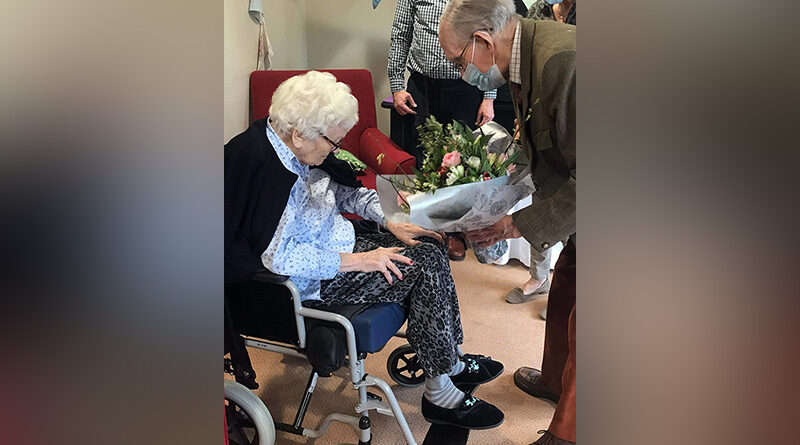 A Dorset care home threw a platinum-standard party for a couple celebrating 70 years of marriage.

The celebration was attended by the couple’s three children, Fiona, Neil and Bill, and there was even a congratulatory message received from Her Majesty the Queen.

Colin met Do in 1948 when he was 18. He remembers bumping into a friend who let slip that he was going to visit the new vicar who had three daughters.

Not wishing to miss out, Colin suggested to his mother that she call at the vicarage, which was considered polite in those days when a new family moved into the area, and took the opportunity to go with her.

Colin invited Do to the local cricket club dance and she accepted. Unfortunately, his only form of transport was a motorbike. But his father was persuaded to let him borrow the family car – and the rest, as they say, is history.

As it was a time of general mourning, many of their guests insisted on wearing black, some even suggesting they cancel the wedding. But they went ahead.

The ceremony was conducted by the Bishop of Reading at Bearwood, Do’s father’s parish. Do wore her mother’s wedding dress and her sisters were bridesmaids. The couple had a very brief honeymoon in Stratford-on-Avon and returned to stay at the vicarage while they looked for a flat in London, where they both worked.

Later, they settled in Hampshire where they built a house and raised the family.

On Colin’s retirement, they moved to Grasmere in the Lake District where Colin drove a steam launch for the Windermere Steamboat Museum and Do was able to devote her time to their beautiful garden, the children and grandchildren and several border terriers.

After a few happy years in Marnhull, Dorset, where they moved to be closer to the family, Do is now cared for at Newstone House and Colin lives nearby in Child Okeford.

Karlene Horswill, Companionship Team Leader at Newstone House, said: “When Colin and his children asked if they could come in and mark the platinum anniversary in some small way around the Covid restrictions, we wanted to make it as special as possible for them.

“Seventy years of marriage is a significant achievement and so we arranged for Do to have her hair and nails done before she was surprised by her family.

“She was absolutely over the moon when she saw them and said: “There’s my lovely husband!”

“Throughout the day Do and Colin remarked what a wonderful time they were having. It was truly special to see them all together and celebrating their long and happy marriage.”