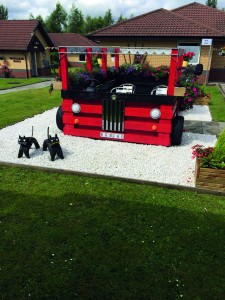 A Wishaw care home has transformed its garden in tribute to the former bus station which used to occupy the site.

Residents and staff at Bupa’s Kirknowe Care Home decided to create a fitting homage to the iconic Wishaw Bus Station, which closed down in 1991, by creating a garden feature inspired by one of its most popular bus routes.

The 240 bus from Glasgow to Wishaw was a lifeline route for residents in the Lanarkshire area, providing transport across the region to the city centre.

The act was also a nod to many of the home’s residents, who were employed at the depot in their working years.

One resident in particular, George McWilliams, who is now in his eighties, still proudly displays his bus conductor badge in his room.

George said: “It’s great to see the Wishaw Bus Station receive a tribute from everyone at Kirknowe – and one that will hopefully last for years and years to come.

“Many of us have fond memories of the 240 bus from Glasgow to Wishaw and it’s a nice way to bring back the good times.”

Margaret Cunningham, Home Manager at Kirknowe Care Home, is thrilled the garden feature is such a hit with residents at the home.

She said: “The local bus depot has so much history with many of the locals in the town and with many of our residents.

“When we decided to renovate the garden we knew we had to come up with a unique idea which everyone would love – and a tribute to the Wishaw Bus Station was the one which stood out the most.

“Conceiving the design also allowed residents and staff to come together and reminisce about memories of their time working at the bus station.

“We feel it’s very important to create environments that are homely, comfortable and allow residents to feel at ease – and this is just another example of the way in which we do so.”