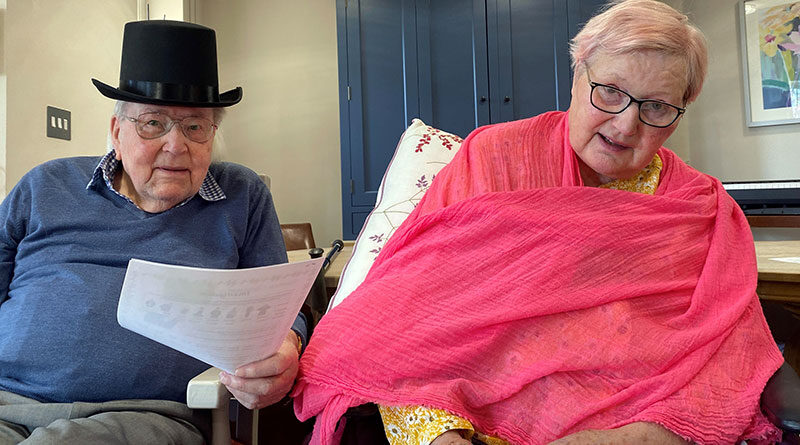 Residents of a Winchester care home used all their powers of deduction to unmask a killer who struck during a stormy night.

Colten Companion, Sarah Kingston, explained: “Our residents learned they were part of Malachai Stout’s somewhat dysfunctional family who had begrudgingly gathered in the ancestral home for a family reunion.

“When a storm rages during the night, knocking down power and telephone lines, the main road to the nearest village is blocked by a mud slide making it near impossible for anyone to leave.

“Then, at first light it is noticed that the door of Malachai’s bedroom is open and his crumpled lifeless body is on the bed. Since it isn’t possible to call the police or for any assistance the ‘family’ decides to get to the bottom of the mystery.”

Abbotts Barton residents were given either a character to play or acted as investigators as the clues were revealed.

They had a profile of their character for background and were encouraged to adlib whenever they wanted to, with often hilarious results.

Companion, Immy Fletcher, said: “We had scripts and props and the residents really threw themselves into it.

“Penelope, Malachai’s daughter was played by Frances Burns, whose dramatic licence had the room in hysterics as she handed out boxes of tissues to soak up ‘tears of grief’.

“Penelope’s rather put-upon husband Harrison (played by George Smith) had resorted to drink to drown out the suffering of his marriage – and constantly reminded his fellow residents of the fact during the evening.

“While our very own Barbara Langdon-Mudge played the granddaughter Sabrina and gave the part the gusto and energy expected from a young social media influencer!”

At the end of the evening everyone was asked in turn to decide who had committed the heinous crime.

The consensus was that the butler had done it. But, Winifred Stout, Malachai’s wife played by Mary Short, confessed all.

Mary said: “It was a brilliant evening. Frances was undoubtedly the star of the show!”

Frances, who enjoyed murder mystery evenings with her own family before joining Abbotts Barton, said: “I can’t believe someone killed my father. I was sure the butler had something to do with it.”

While George joked: “I’m not sure I’m going to sleep tonight. There could be another murder.”

Companion Sarah concluded: “It was a brilliant evening. We laughed so much and it was a pleasure to hear so many residents talking about how much they had enjoyed it.”