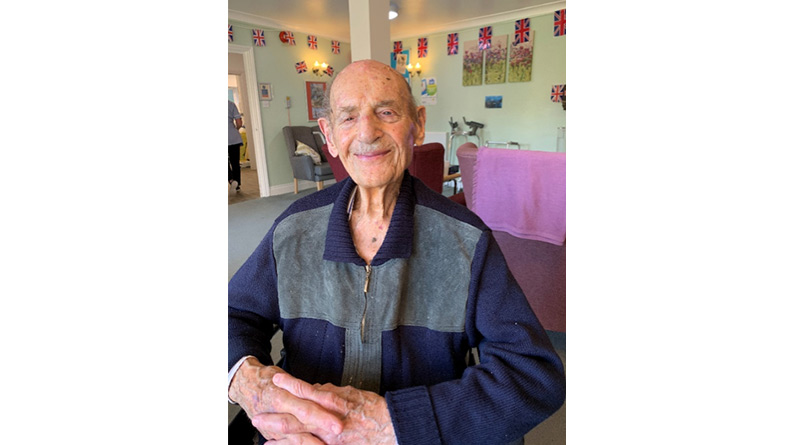 A resident at Patcham Nursing Home in Brighton is leading VE Day celebrations with a poem he has written for the occasion.

Len Goldman, 103, is a published poet and served in Burma during WWII.

He was asked to write a poem to commemorate the 75th anniversary of VE Day, drawing on his memories of the time.

His poem, The Gores of War, paints a vivid picture of battle and eventual victory, and his feelings about the time he served at war.

The former history teacher was born in Weston-Super-Mare and moved to Brighton as a child. In addition to his poetry, he has published a number of books about his life growing up in Brighton, his experiences in India during the war.

Len has been a resident at Patcham Nursing Home since January and is currently keeping in touch with his wife, Rita and daughter Fleur using FaceTime and by phone, due to visitation restrictions caused by the coronavirus.

Prior to the lockdown, Rita would visit for dates in the sun lounge with a small sherry, and Len would recite her a poem or two. As well as calls, romantic Len also sends his wife notes every day.

Pat Hurst, manager at Patcham Nursing Home, said: “Len is a fantastic resident and is always delighting us with poems. He has a lovely way with words and his VE Day poem really captures the spirit of the day and what it must have been like to be there.

“It is important to us to help all of our residents to continue the activities they enjoyed when they were younger. Exploring creative activities, such as writing helps to keep their minds active and we love seeing the amazing work they produce.

“Len’s wish is to have a laptop at the home so he can write more poetry. If anyone has a spare working laptop that they could donate to our verse-writing veteran, he would love it.”

Len said: “I am absolutely overwhelmed with the staff and care at this home and my gratitude to all the staff who go out of their way to look after me and that’s what inspired me to write the poem.”

Gores of war by Len Goldman

Tens of millions wounded or dead

Yes, the great god of war had sumptuously fed

Orphans and widows grief stricken what a terrible sight

We tried to console them, but the task was not light

Yes, the final battle approached once it had begun

The western allies triumphant from our side of the world

And now the bright flag of victory was proudly unfurled

What an outpouring of happiness and relief

In Trafalgar Square on VE Day was beyond belief

There were millions who got safely home

They stayed there with their families never more to roam

Wars are an abomination

We should ban them forever

And handling their weapons one day we will sever

But let’s remember that overwhelming feeling

The warmth and the joy so heartfelt and revealing