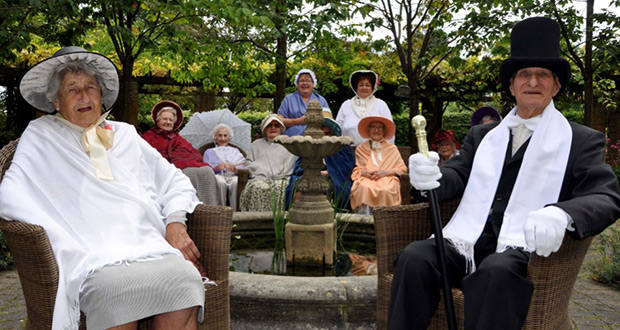 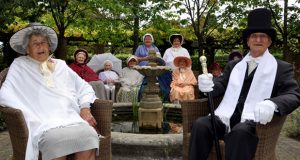 A Hampshire care home has enabled a 95-year-old resident to keep alive her family’s strong ancestral connections with Jane Austen.

Helen Lefroy is a descendant of Jane’s friend Anne Lefroy, whose nephew Tom was reputedly a romantic suitor of the novelist.

Helen recalls visiting Chawton House as a girl from her own family home at nearby Farnham in the 1920s and 30s.

Now living at Colten Care’s Abbotts Barton care home in Winchester, she has been helped to participate in events marking the 200th anniversary of Jane’s death.

Staff at the home involved Helen on minibus strips to the recent Sitting With Jane public art trail featuring 24 ‘book benches’ in and around Basingstoke.

Along with fellow residents, she has also visited the Jane Austen exhibition at Winchester library and a special service in memory of the novelist at Winchester Cathedral.

The home’s ‘Austen season’ culminated in a Regency afternoon with staff and residents, including Helen, all dressing up in period costumes.

Reflecting on her ancestry, Helen said: “We know that Anne Lefroy was a very able lady, interesting and confident, and she and Jane had a friendship with long literary discussions even though there was quite an age gap between them.”

Helen added: “In my own lifetime, I particularly remember the design of the house at Chawton. Rather than go through a number of rooms to get from one side to the other, there was a corridor that ran right across which I thought was strange. I also remember playing tennis in the gardens but they became unkempt and made it difficult to play.”

Dee said: “It has helped Helen rekindle all those amazing family connections and provided a great deal of interest for other residents too. The commemorations have even prompted one or two of our overseas staff to start reading Austen novels as they had not heard of her before.”