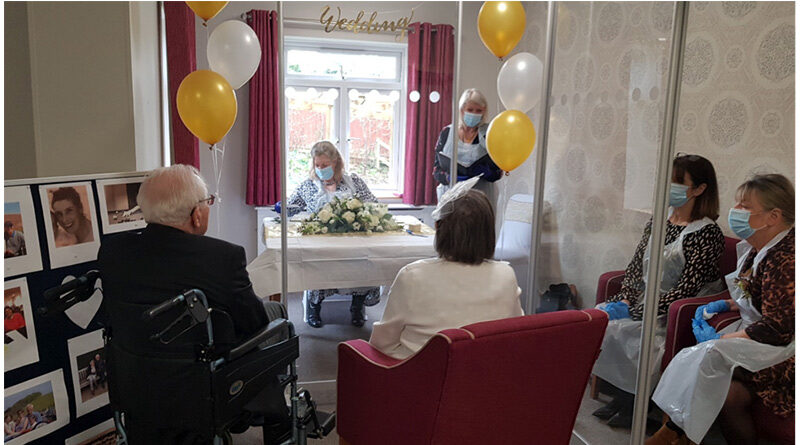 An 85-year-old care home resident married his 91-year-old sweetheart of 26 years after a senior registrar was given special powers to enable it the nuptials to go ahead.

Peter Smirles (cor) has been a resident at The Cedars care home in Purton, near Swindon for just over a year and had planned to marry Jean Robson sooner but the pandemic saw repeated postponements.

Unfortunately, Peter’s health began to deteriorate and just after Christmas his doctor advised that the wedding should be held as soon as possible.

Amy Thorne, manager of The Cedars, which is run by The Orders of St John Care Trust, contacted Wiltshire’s superintendent registrar Sarah Bradley who secured a special license to enable the wedding to take place within the home. Colleagues at the care home then worked with Jean and her daughters Alison Buckland and Susan Wyths to ensure a ceremony to remember and COVID-safe wedding took place.

On Tuesday, 23 February the blushing bride walked up the aisle and said ‘I do’. The marriage was witnessed by Alison and Susan and Peter’s daughter and granddaughter joined on Skype from their home in Norway.

Jean said: “It was lovely that so many people put in so much effort to make sure this could happen. We have been planning this for so long but it seemed it might never happen. Peter actually first proposed to me about 25 years ago but I said ‘why rush’ and then it never seemed to happen.

“Amy and her team have been so good to make this happen, and The Cedars looked lovely today.”

Alison added: “It has been hard on my mum and Peter, but I can’t thank Amy and Sarah enough for making this happen. It means so much to my mum and to the whole family.”

Both Peter and Jean have lived in Purton for a long time and are well known through Jean’s job as a teacher and Peter’s as a dental surgeon.

Amy said: “I only started as manager here at The Cedars in January and this was about the first thing I was asked to do and we have been delighted to make sure it goes ahead. We managed to get Peter’s bubble together and have a beer or two for a stag do the night before as well.

“The organisation of the wedding has been challenging but we worked through the risk assessments and with our infection control experts to make sure that it was as safe as it could be.”

All visitors to the home were not allowed in until they had returned a negative result from a Lateral Flow test and full PPE was worn at all times.

Sarah added: “It’s been two months in the making, and I was thrilled to be able to do this.