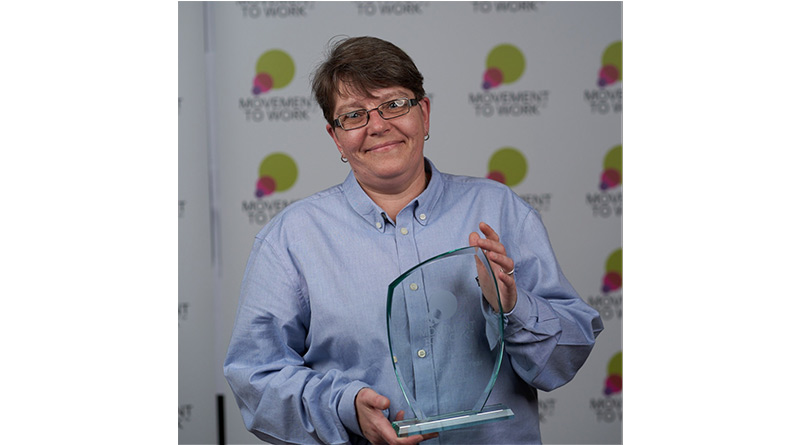 Jackie Day, an Area Trainer for Bupa, was given the award in recognition of her efforts in driving the company’s involvement with the network.

A coalition of the UK’s leading employers, charities and government, Movement to Work strives to reduce youth unemployment, by giving people confidence, practical skills and experience to help them progress to meaningful careers through work-placement schemes and other job opportunities.

Over the past year, Jackie has acted as a mentor to 13 trainees who’ve undertaken placements at Bupa’s Kensington care home in West London, providing a constant point of contact throughout their time with the home, and sharing advice from her 30 years in care.

While being supported by Jackie, the group all received hands on experience working across areas of the home including activities, catering, housekeeping and maintenance.

Speaking of the award, Jackie commented: “Movement to Work is a really important programme, so it was an honour to be recognised at the awards, though certainly not something I was expecting!

“While I’m really proud to have won, for me the real benefit is getting to work with these great young people every day. I never feel like I’m going to work in the traditional sense – it’s more like getting on with a hobby with friends.”

Joan Elliott, Managing Director for Bupa Care Services, said: “Movement to Work does wonders for young people in our communities. But it’s not just the young people who benefit; it’s helped us attract some brilliant colleagues – many of who have stayed with us, thanks to Jackie. I’m thrilled to see her recognised with this award and would like to congratulate her, along with our other finalists.”

In addition to Jackie’s victory, Bupa was also shortlisted for three other accolades on the evening – including the ‘Movement to Work Employer of the Year Award’.

Elsewhere, Bupa’s Movement to Work Programme Manager, Shelley Haynes, was a finalist in the ‘Individual Impact Award’, while Susanna Bannister was shortlisted in the ‘Breakthrough Star’ category. Susanna joined Bupa’s Kensington care home as an Activities Co-ordinator after a successful traineeship with Jackie last year.

Sam Olsen, Chief Executive of Movement to Work, added: “Movement to Work knows how vital Mentorship is to develop meaningful careers for young people who need more support to get onto the career ladder.

“People like Jackie are at the very heart of our determination that all young people should be given a chance in the workplace. They inspire, provide confidence and help develop life and work skills. Jackie is a great example of how hard mentors work and how much difference they can make to young people once they have such positive, caring and professional influences in their lives.”

The ceremony comes days after Bupa announced its plans expand the trainee programme into five further areas during the first half of 2020, working with its homes in Cardiff, Southampton, Birmingham, London and Edinburgh. Around 50 young people will benefit from the plans to secure traineeships in the first six months of the year.

In her role, Jackie manages the learning and development across three homes in London, delivering inductions and mandatory training for all colleagues across the homes, as well as identifying areas for extra development

As well as supporting Bupa with the successful role out of the Movement to Work programme, Jackie also plays a key role in signposting career progression opportunities, such as apprenticeships, in the homes she works in.