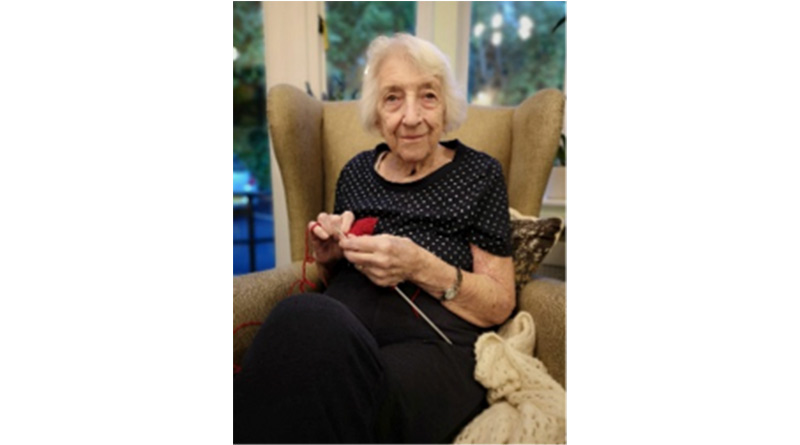 A popular knitting club at a Surrey care home, which regularly meets to create pieces for a number of charitable causes, is helping to restore a sense of pride and responsibility in older people – including one member who used to knit items for soldiers during the Second World War.

The ‘Knit and Natter’ group at Huntington House, based on the Huntington and Langham Estate, in Hindhead, Surrey, was initially set up by a lady who lived with Parkinson’s and arthritis in order to help speed up her progress, and has now become an integral part of life for its members.

The group has rekindled fond memories for member Mollie, aged 94, who used to spend nights around the fire with her mother and grandmother, knitting socks for soldiers who were away fighting in the war.

Mollie, who learnt to knit from her grandmother, said: “My mother would go down to the council buildings each week for the wool; one week was royal blue for the Royal Air Force; the next week was navy blue wool for the Navy; the third week was green for the Army.

“After the war ended, I said I’d never knit another sock and I haven’t! I love knitting though, I used to knit all my own clothes, from cardigans to scarves – never socks though! It’s very relaxing and sociable.”

In recent years, the group – which now comprises residents, staff, one of the Estate’s directors and two ladies from the local WI – has produced knitted poppy brooches for the Poppy Appeal as well as beautiful blankets and beanie hats to be donated to hospitals in the UK and South Africa to help keep premature babies warm, all using wool produced from a herd of rare Ryeland sheep – one of the oldest English breeds – which lives on the Estate.

Charlie Hoare, director of the Huntington and Langham Estate, said: “When we were asked by one of the residents if they could set up a knitting circle it was an immediate ‘yes’, but it was only after it started that I realised just how much purpose and meaning there was behind their knitting – knitting was a hobby that came with responsibility and pride, one that has supported soldiers and premature babies; people in incredibly vulnerable situations.

“Regardless of whether you knit or not, being part of a charitable project, and raising money for meaningful causes such as the Poppy Appeal, comes with a sense of purpose and a feeling that you are making a difference to someone else’s life. When you become reliant on others to care for you, as is often the case for people living here, you can feel a loss of self-worth, but you don’t have to. Finding a way to help others can often make up for losing the independence to look after yourself.”

As well as being used by the Knit and Natter group, the wool is also sold by Huntington and Langham to raise money for various other charities.