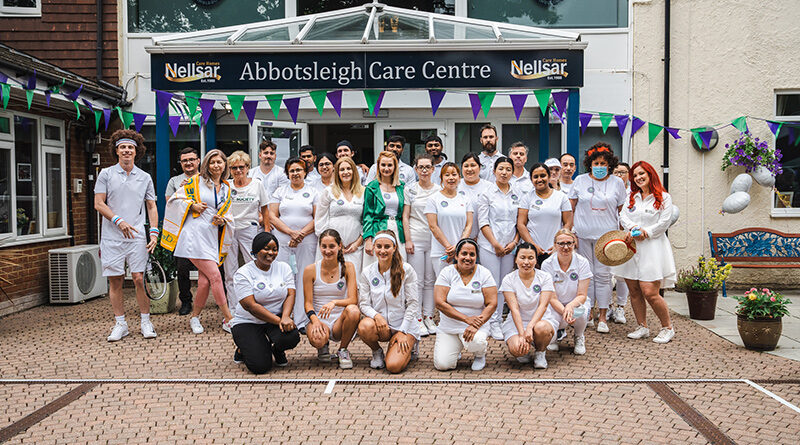 With Wimbledon concluding at the weekend, a South East care group has thrown a tennis-themed garden party to mark the launch of a new charity supporting young tennis players to chase their dreams – as well as helping those from low-income families gain access to funding to pursue the sport professionally.

Nellsar recently founded Tennis-Talents – a new charity in the process of registration with the Charity Commision, committed to giving young people the opportunities and skills to enjoy longevity in the sport in which they love, regardless of their financial background.

To celebrate the launch of the charity, which was spearheaded by the care group’s very own Alina Abagiu, Joy Cagande and Viv Stead, Nellsar hosted a special Wimbledon-themed party at one of their flagship care homes, Abbotsleigh Care Centre, in Staplehurst, Kent, which involved Pimms and strawberries and cream aplenty during a live big screen showing of the Grand Slam event. Residents embraced the Wimbledon theme, donning headbands and racquets in a backdrop of white, green and purple bunting – the associated colours of the tournament.

The event was also held to thank staff for all their hard work over the last two years, and gave the residents a chance to embrace the sport they loved playing in their younger years – with many having attended some Grand Slams themselves. In addition to Wimbledon-themed cakes and a BBQ, staff got into the spirit by dressing up as their favourite players – with Nellsar’s Managing Director, Martin Barrett, being John McEnroe for the day.

Resident June Spencer said: “It was a lovely day all-round, especially the food and friendliness on offer. I enjoyed watching the tennis on the big screen – I wish I had taken the sport up when I was younger!”

Nellsar Recreation and Well-Being Champion Paula Smy, added: “It meant a lot to us to see the senior management team there having fun with us and the local community. It felt more like a family party than a working day – after all, it’s not every day you get to watch live Grand Slam tennis on a giant screen with strawberries and cream, in addition to watching local professionals in person!”

Amongst one of the charity’s inaugural members was Alessia Popescu, an aspiring 17-year-old tennis wonderkid from Kent, who is ranked third in the county and 700th worldwide.

Speaking after the event, Martin Barrett, Managing Director at Nellsar, said: “Myself, Alina, Joy and Viv are absolutely delighted to officially launch Tennis-Talents. As a family-run business, when someone is knocked down, we feel that we have a moral obligation to run to that person’s aid. Alessia’s situation was no different. The Popescu family have been our friends for many years, so when we heard the tragic news of Alessia’s father passing, we just knew we had to support her and her family in every way possible.

“We’re all so proud of Alessia for everything she has achieved so far in her career and we look forward to supporting her journey for many years to come. She’s such an incredible role model to everyone at Nellsar and we all cannot wait to get behind her and take the world of tennis by storm!”