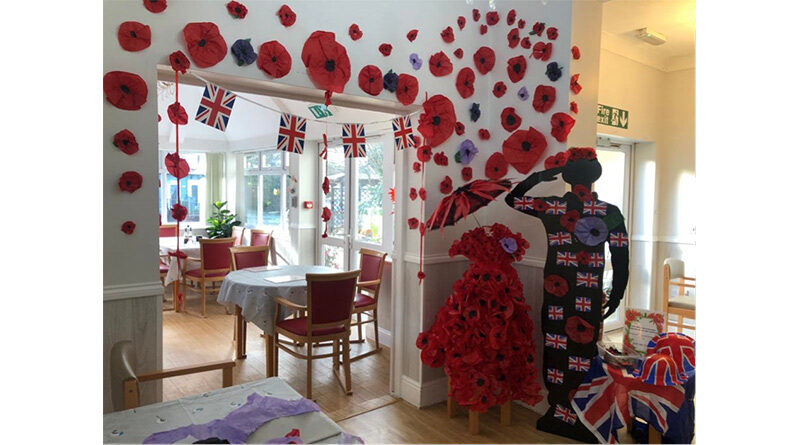 A care group has marked this year’s Remembrance Sunday by hearing and reflecting on the wartime memories of its residents.

Staff at Nellsar, a care group covering the South East of England with homes in Surrey, Essex and Kent, took a moment to hear and reflect on the mix of poignant and uplifting memories of its residents who had lived through the Second World War.

At Woodstock Residential Care Centre, in Sittingbourne, Kent, 81-year-old Barbara Woollett clearly recalled the loud noises of airplanes flying overhead and dropping bombs, before stepping out to view the resultant destruction left in their wake. While 87-year-old Helen Prow shared proud memories of her father, a sergeant major in the war.

At St Winifreds Care Centre, in Deal, Kent, 90-year-old Molly Annall reflected on when she used to sleep in air raid shelters and sing songs with others to cancel out the noise of enemy aircraft flying in the air above ground. She also shared how she was literally knocked off her feet when a bomb went off near her.

Fellow resident 88-year-old Barbara Lewis recalled how she lived near a TNT factory which her mother worked at and how the workers would have to quickly black out the factory’s windows whenever enemy planes flew by. For 87-year-old Lewis Cooper, the war brings back the memory of being a schoolboy in Yorkshire and delivering lunch to his father who was a policeman, when sirens began blaring and a streak of light shot through the sky. An explosion from a bomb sent his father flying through the air, but Lewis remembers how he got up, dusted himself off and ate the jam sandwich Lewis had bought him.

At Meyer House Care Centre, in Erith, Kent, 95-year-old Dorothy Desmond revealed how at 16 years old, she was so keen to join the war effort she tried to sign up to the Auxiliary Territorial Service claiming to be 18! Dorothy’s sister Kath swiftly informed her parents of her sister’s plans, which never came to fruition.

84-year-old Beryl Day shared how she was evacuated from school and instructed to lie down on the road when a German plane flew overhead one afternoon. The plane then turned around and bombed the school and surrounding area. Miraculously, Beryl and her sister were unharmed in the incident.

Viv Stead, Recreation and Well-Being Manager at Nellsar, said: “As with every year, it was a very special day on Sunday, and the staff and residents alike both got something out of it by sharing and listening to the stories of those affected by the war.

“As well as the sharing of wartime memories, our homes also made wartime displays and wreaths using poppies, while also sharing and celebrating the medals of residents who were active in the war. The poignant reflective period was followed by music and dancing to some wartime classics, which everyone got involved in. 2020 has been a tough year for all of us living and working in social care, and occasions like this bring us all together in spirit and unity, helping us to remember that bad times do indeed pass.”