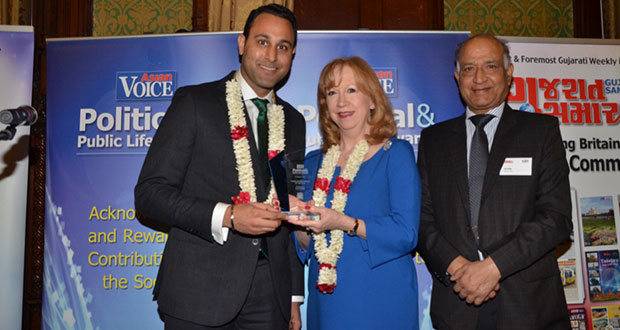 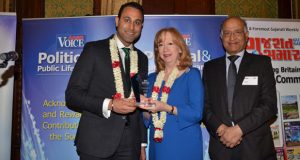 Care home operator, Harnoop Atkar, has been named ‘Young Entrepreneur of the Year’ in a national awards ceremony at the House of Commons.

Harnoop, who lives with his family in Chigwell, said the award was an honour to receive.

“I only realised I was a finalist when I got to the ceremony. To win was a real honour and I’m thrilled to have this recognition.”

The Asian Voice Political and Public Life Awards are given annually to individuals who have made a difference to their local communities. The judges recognised Harnoop’s skills as an entrepreneur, having successfully led a deal raising £30 million of investment to support Oakland Primecare’s next phase of growth, which will increase its number of beds from 152 to approximately 800.

“Harnoop’s key to success is he instils the values of treating the elderly with dignity and respect,” the judges said.

He took on reins of the family business in 2014, after having begun his career as far away from it as possible.

“My father, Sav Atkar, began his care business in the late 1980s and had always worked very hard to make it successful,” said Harnoop. “I grew up watching and being influenced by him and used to help my mum with the payroll and admin as it was an opportunity for me to get involved.

“However, when I got my degree I wanted to go somewhere completely different.”

He gained a degree in chemical engineering in 2008 and entered the graduate training programme at Sellafield nuclear plant in Cumbria. He moved into the commercial arm of the company working on procurement and contract management before taking positions at PricewaterhouseCoopers and Ernst and Young as a management consultant.

“I had lots of ideas and I wanted to use my experience working in the City towards expanding the foundation my father had established,” said Harnoop. “My vision was to take the company further to become the market-leading care home group in the country. The investment and belief we received from Synova Capital has helped towards us achieving that objective.”

Woodland Grove care home in Loughton offers residential, nursing, respite and dementia care for up to 72 people. In 2016, its manager, Jo Coughlan, was named ‘Care Home Manager of the Year’ in the Great British Care Awards for London.

Hastings Court provides personal, nursing and dementia care for up to 80 residents and is aiming to become the first home in East Sussex to achieve Butterfly status for its dementia care.

“We want to provide exceptional care for the elderly,” said Harnoop. “That is what we are all about as a company, and with our expansion we hope to provide that for many more people.”