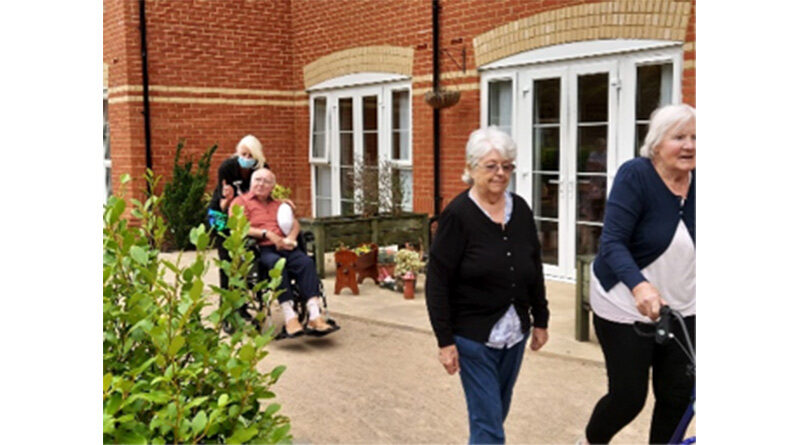 Care home residents have been raising funds for the fight against dementia with a sponsored charity walk. Fairmile Grange care home in Christchurch recently held a ‘Memory Walk’ in support of the Alzheimer’s Society, which has seen thousands take part in similar walks around the country this year.

Putting their best foot forward for charity, residents and care teams have clocked up more than 130 laps of the garden area between them. Part of the inspiration came from the extraordinary fundraising achievements of Captain Sir Tom Moore earlier this year.

Kim Butters, Wellbeing Manager at Encore Care Homes Fairmile Grange said: “The residents and team were moved and inspired by Captain Sir Tom Moore doing his charity laps during the lockdown. We thought that we could do that here at Fairmile Grange, as we often walk residents around our beautiful garden. Rather than just the care team walk for charity, we thought it’d be nice to get residents involved too. Our residents love to be outside and it’s a special time, having that one to one interaction of walking and talking. We’ve had a positive response from everyone and have launched a Just Giving page for friends and family to support us.”

The money raised from the walk will go towards helping the estimated 850,000 people living with dementia in the UK. Fairmile Grange specialises in residential, nursing and dementia care with a dedicated floor offering support for residents with dementia.

“It’s been was lovely thing to do and we all felt that we’ve contributed to something positive to help this worthy cause. Many of our residents live with dementia and have differing types of mobility. It’s a very important charity to us and if we can play our part in helping future generations affected from this disease, then it’s a good thing to do. The residents will all get a medal, which gives a real sense of achievement. It also highlights the spirit of the older generation who like Captain Sir Tom Moore, still want to help people and raise money for a good cause,” added Kim.