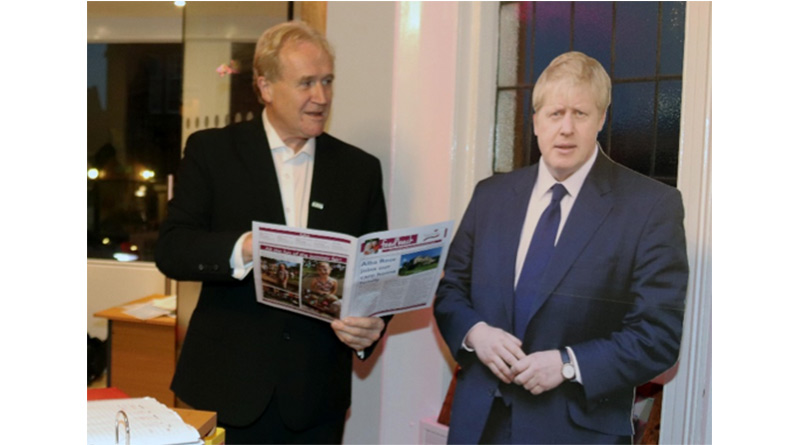 Campaigners fighting for a better deal for social care at the General Election have released an animation based on a Christmas Carol.

The short video, issued by the Independent Care Group today, features Boris Johnson being warned about the future of care unless he acts.

In it, Mr Johnson is visited by the Independent Care Group’s Chair, Mike Padgham who tells him the NHS will collapse if social care is left to fail.

Meanwhile, Mr Padgham has been forced to show cardboard cut-outs of the main political party leaders around his nursing home in Scarborough after they failed to come in person.

Mr Padgham said: “There are just days left to save social care and I wanted to get the message across, particularly to Mr Johnson, that it isn’t too late.

“He can come up with a plan for social care that gets care for the 1.5m people who aren’t currently receiving it and that it doesn’t have to turn out like the awful scenario depicted in the video.

“The £1bn pledged in the Conservative manifesto is inadequate and won’t even scratch the surface of what is needed.

“We have seen Mr Johnson place social care well down a list of his priorities for the first 100 days of his premiership, if elected. I would like to see it at the top of that list, the number one domestic priority, and that is what this short video is really saying.”

Mr Padgham first wrote to the three leaders to invite them to attend the group’s annual conference in York last month. When they failed to attend he took the cut-outs on stage instead and then wrote to the leaders again, inviting them to visit one of his homes in Scarborough, North Yorkshire, to discuss the issue.

Mr Padgham added: “It looks as though they aren’t going to visit before the election, so we have had to show the three cut-outs round instead!

“The serious issue is that I want the three leaders to see what a crucial issue social care is at this election and want to hear how they plan to tackle it and when. Some 1.5m people are living without the care they need and yet social care is barely getting a mention.”

Mr Padgham has also commissioned a four-line poem to Boris Johnson, included in the video, calling on him to rescue social care:

‘Don’t be a Scrooge, Boris.

Show us that you care.

Fix the Social Care Crisis once and for all

Just as you promised to dare.’

The ICG has launched its own social care manifesto calling for firm pledges to tackle social care and commit to investing more in the sector.

In its manifesto, the ICG calls for the next government to get more money into social care to halt a crisis which has seen care homes closing and home care providers handing back untenable contracts.

It wants a guarantee that people receiving publicly-funded care can receive it in their own home or close to where they live so that they remain in their own, familiar, communities.

The ICG calls for better funding of social care, through taxation or National Insurance and for social care and NHS care to be merged and managed centrally or locally.

The ICG suggests that a fixed percentage of GDP should be spent on social care, that dementia should be regarded as a health issue, like cancer or heart disease, that there should be  a cap on social care costs, including ‘hotel’ charges and that people should be encouraged to save for their own care, as they do for a pension.

It also calls for measures to improve the standing of care staff to improve recruitment, including a minimum wage for social care workers, above the National Living Wage and more nurse training and bursaries to encourage recruitment and help end the shortage of nurses in care.

The ICG also wants to see a minimum, agreed level of care fees, social care businesses to be zero-rated for VAT so that they can claim it back, as other business sectors do and the Care Quality Commission to have much greater powers to oversee all commissioning practices such as per minute billing and 15-minute visits.