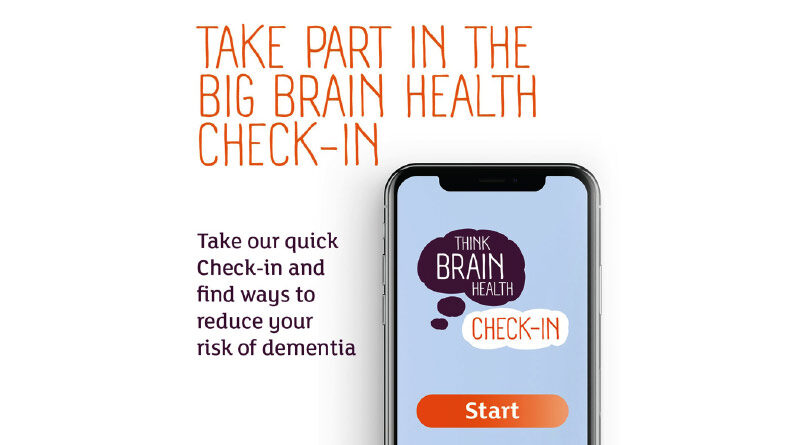 Only 2% of the public are doing everything they can to keep their brains healthy, according to new figures released by Alzheimer’s Research UK/

Now the dementia research charity, backed by TV and radio presenter Kirsty Gallacher, wants to empower people to look after their brains and reduce their risk of dementia in later life, with the help of a free new digital tool. The Think Brain Health Check-in, launched today, prompts people to answer a series of evidence-based questions about the factors that research has shown could be influencing their brain health.

According to the latest evidence, up to 40% of dementia cases could be prevented, if 12 risk factors could be eliminated entirely. These include smoking, hearing impairment, high blood pressure, physical inactivity, excessive alcohol consumption, diabetes, and infrequent social contact.

However, only a third of people realise that there are steps they can take to reduce their risk of dementia.

According to a YouGov survey, commissioned by the charity, a staggering 98% of people have room for improvement when it comes to looking after their brain health.

The survey also revealed:
• While 35% of people said they’ve had concerns about their hearing, more than half of those (59%) reported that they haven’t done anything about it.

• People find they’re struggling to squeeze in two and a half hours of moderate exercise a week – the NHS recommended amount – with 26% admitting they do this occasionally, while 22% never do this.

• Promisingly, people say they are doing a great job at keeping connected – with 73% of the public speaking to friends, family and colleagues either daily (40%) or several times a week (33%).

• And people appear to be keeping on top of getting their blood pressure checked, with 61% having it looked at over the last year.

The Check-in is based on the latest evidence in dementia risk reduction and was developed under guidance from an expert group of researchers and members of the public. It takes around 10 minutes to complete. At the end, it highlights the areas where people are doing well, as well as giving them tips on areas where they can be doing more to look after their brains and ultimately, it is hoped, lower their chances of developing dementia.

The Check-in covers everything from physical activity to healthy diet, as well as factors like hearing, sleep, cognitive challenge and mental wellbeing. While people of all ages are encouraged to take the Check-in, it’s primarily aimed at adults in their 40s and 50s. This is because research tells us that this is a particularly important window for taking action to look after our brain health and reduce our risk of dementia.

Kirsty Gallacher is backing the launch of the Check-in after her grandfather died from dementia.

The 46-year-old said:“I’m at an stage in my life where I do worry about dementia, especially after seeing the devastating effect it had on my grandfather. To watch someone I loved so dearly – someone who had previously been so strong and who had fought for their country during the war – die in that way was the most horrible thing. I want to do everything I can to stop people from having to experience this heartbreak, which is why I’m delighted Alzheimer’s Research UK has launched the Think Brain Health Check-in and I’m proud to be supporting it.

“It’s so vital that people know there are things we can all do to take care of our brains and reduce our risk of dementia in later life. The Check-in is such a simple way for people to take stock of their brain healthy behaviours and find out what they can be doing to show their brain a little more love. The Check-in really opened my eyes to all the things that influence our brain health – from the amount of sleep we get at night, to our hearing. Now I know what I can do to keep my brain healthy, I want to help others to do the same and that’s why I’m urging the public to take the Check-in.”

Alzheimer’s Research UK first launched it’s Think Brain Health campaign back in 2021 to raise awareness of the potential for people to look after their brains and reduce their risk of dementia. The campaign is focused on three key principles – love your heart, stay sharp and keep connected. The Check-in was developed following a strong response from the public to learn more about this area.

Prof Jonathan Schott, Alzheimer’s Research UK’s Chief Medical Officer, said:
“We hope the Think Brain Health Check-in will show people that there are things that can be done to improve their brain health, and provide a practical and easy means to allow them to take action to reduce their risk of dementia.

“While there are no sure-fire ways to prevent dementia yet – risk is likely to relate to a combination of our age, genetics and lifestyle – evidence has shown that there are steps we can all take to improve our brain health. Currently only a third of people realise this is possible, and we urgently need to change that. It’s never too early or too late in life to start looking after your brain – so please do take the Check-in today and see what you can do to improve your brain health.”