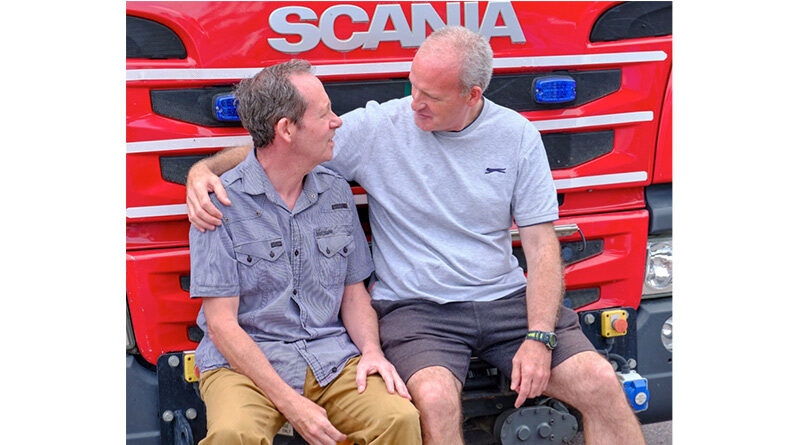 Patrick O’Hanlon, a 62-year-old resident living at MHA Greenways care home in Bognor Regis, recently enjoyed a trip inside a fire engine for the first time since he served as a firefighter 30 years ago.

Staff working at the care home asked Patrick what one ambition he would like to fulfil as part of MHA’s ‘Seize the Day’ scheme, which helps residents’ visions come to life.

Patrick said he’d like to experience sitting inside a fire engine again – having left his role in the fire and rescue service due to Alzheimer’s.

Joanne Mitchell, the care home’s activities coordinator, quickly got to work and contacted the local fire and rescue station to arrange for a visit to take place. The fire station manager also had a personal interest in the request, as he was part of Patrick’s crew.

On Thursday 26th August, the fire station team – along with more of Patrick’s former crew mates, some of whom are now retired – drove down to the home in one of their fire engines.

Patrick was also greeted outside by his three children Sam, Alice and Megan, as well as his brother Bob and sister-in-law Lesley, who he had not seen in almost two years due to the pandemic.

Of the day itself, Patrick said: “It was wonderful to see my children and brother and my friends”

Joanne Mitchell, activities coordinator, said: “It was so lovely to see Patrick enjoying his Seize The Day moment with his family and ex colleagues. He was delighted when the fire engine arrived and relived the experience when he sat inside. There was lots of laughter and tears of joy, this moment touched all our hearts.”

Born in Belfast, Patrick is the eldest of three children. His family left Northern Ireland in the early 70s due to the troubles, staying with their uncle and aunt in Chester, before later moving to West Kirby, near Liverpool.

Patrick joined the RAF in 1977, where he helped to refuel helicopters. He travelled with the RAF to Belize, Ascension Island, Hong Kong and did tours of Northern Ireland.

He left the RAF after 9 years and joined the fire service, where he reached the rank of leading firefighter and watch commander. He served across West Sussex – in Horsham, Bognor Regis and Chichester.

In his role, Patrick also taught new recruits how to use breathing apparatus and carry out emergency life support techniques.

Seize the Day was created by MHA, a national charity which provides care, accommodation and community-based support, with the vision of helping people to live later life well.

Residents are asked what one thing they would love to achieve, and the initiative then helps that dream come to life.