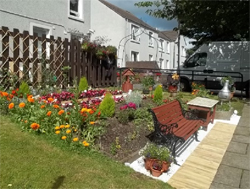 The garden at Bield’s Thornhill Court was a barren, boring and lifeless area when tenants David and Hilda Spender arrived in 2008.

However, with six years of hard work, fundraising and assistance, the garden is an award-winning hub of colour, beauty and vegetables.

With the help of local councils, community service individuals and MSP Michael Matheson, the garden has gradually been worked on until it blossomed into its blooming best.

The garden has been such a success that it was the first to win Beautiful Scotland’s distinction award in 2013.

The garden includes a fruit and vegetable patch, which has a wide variety of produce including potatoes, onions, cabbages, plums and even a pear tree.

Talking about the fruit and veg, David Spender said “It took a while to get going, but this year it has really come to fruition.

“When I was younger I was taught the difference between luxurious and luxuriant, and the fruit and vegetable patch really is luxuriant.

“The fruit and vegetables are absolutely wonderful. It’s like a greengrocers with all the things you can find in there.”

The garden also features an insect village made by David’s wife, Hilda. Of the village, Mr Spender said: “We wanted to encourage wildlife into the garden such as bees and butterflies.

“As they said on the film Field of Dreams ‘build it and they will come’ and they did indeed come.”

Mr and Mrs Spender, who have now moved to Bield’s Robertson Court development in Stenhousemuir, spoke highly of the Thornhill Court staff who were able to finance tables and chairs to go in the garden.

Mr Spender said that they were keen to encourage the more reluctant residents to use the garden as part of a healthy lifestyle, he added: “Hardly anyone used to sit outside at Thornhill Court, so we thought the tables and chairs could encourage them to get outside.

“It lowers blood pressure and can get them their daily dose of vitamin D, so we were sure to tell them the health benefits.”

Bield – a registered charity in their 41st year of business – has grown from humble beginnings, opening its first housing development in Bo’ness to become a major supplier of a wide range of housing and services for around 20,000 older people across 22 local authorities.