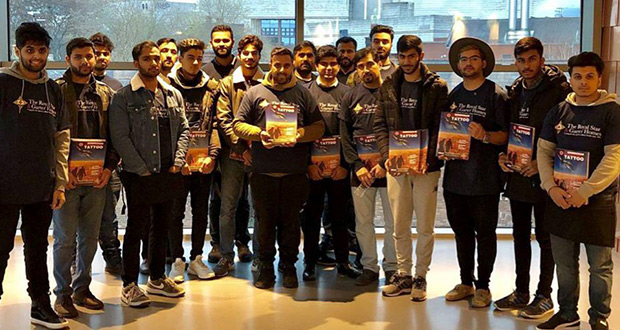 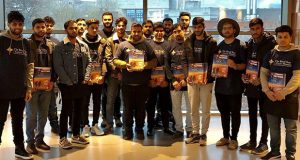 A total of £8,159 has been raised for The Royal Star & Garter Home in Solihull at the 2018 Birmingham International Tattoo.

The event, which is Britain’s largest indoor tattoo and features over 1,250 performers, took place at Arena Birmingham on 24-25 November.

It marked the 11th year that the Tattoo had supported the Charity, which cares for ex-Servicemen and women and their partners living with disability or dementia, and brings the total amount collected for The Royal Star & Garter Homes to just under £110,000.

The money was raised through programme sales and an end-of-show collection from Sunday’s performance. The Charity is grateful to the West Midlands branch of Ahmadiyya Muslim Youth Association, which provided 35 volunteers on the day to sell programmes and manage the collections.

The two-day event included marching bands from across the UK and Europe, spectacular displays and all the military pomp and ceremony associated with the prestigious annual Birmingham International Tattoo.

Also impressing the crowds was The Wreath of Respect Motorcycle Riders – a group of men and women who are passionate about motorbikes and use this as a means of supporting charities which help serving members and veterans of our Armed Forces, many of the team being veterans themselves.

Tattoo Producer Norman Rogerson MBE said: “Since we started the Birmingham International Tattoo 30 years ago we have supported many charities and we are particularly pleased, through the generosity of our audiences, to continue to support The Royal Star & Garter Homes and their local Solihull home in their ongoing work caring for the veterans who have given so much to the country.”

The Royal Star & Garter Homes’ Chief Executive, Andy Cole, addressed the audience at the Tattoo. He later said: “We are extremely grateful to the organisers, the generous audiences and the volunteers at the Birmingham International Tattoo. They have once again supported us magnificently and we are proud to be a part of this military community. The money raised will make a real difference to the lives of the residents living in our Solihull Home.”