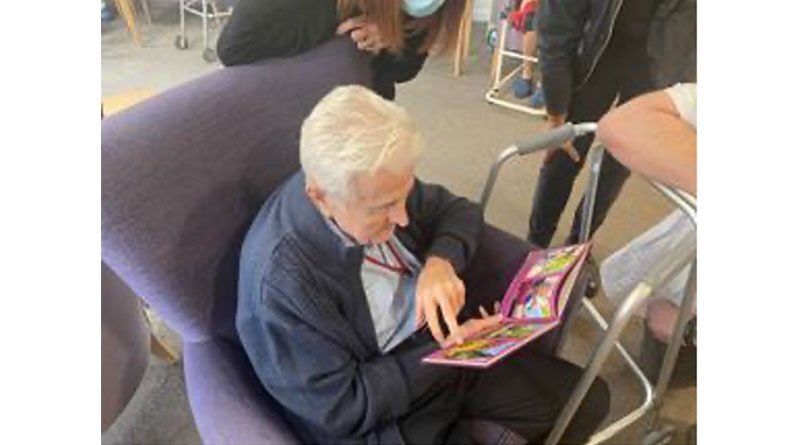 A resident of a Bexhill care home has been issued a photo album showcasing the changes to the updated garden at a home he once worked at.

Henry Griffiths has a 50-year affiliation with Methodist Homes (MHA) which runs MHA Richmond care home, where he currently lives.

To mark his association with the charity, he was presented with a photo album of MHA The Wilderness, a historic garden in Croydon, south London, where he began his working life.

The seven-acre garden is situated behind MHA Hall Grange care home and was recently renovated with the help of a National Lottery Heritage grant and opened up for residents and the local community to enjoy once again.

Henry started working as a gardener at MHA Hall Grange in 1961 and played a big part in developing The Wilderness when he was there.

He then moved into Richmond Grounds, near to the home in 1993 and continued to look after the garden until shifting to MHA Richmond, in Bexhill 18 months ago, culminating into a 50 year affiliation with MHA.

Mr Griffiths was presented with an 18 page picture book showing the recent changes after he was too ill to attend the unveiling presentation.

Staff members from MHA Hall Grange personally visited Mr Griffiths, who was “over the moon” when he received his surprise gift.

The 93-year-old added: “The album is great, the garden looks amazing and it’s brilliant to see it being utilised to its full potential.

“I was over the moon when I saw the book, and to see something I started become what it is today was nice.

“It’s a very popular location, you do get a lot of people wanting to see it and it’s great for residents and visitors.

“It would have been nice to see it in person, but unfortunately due to my health I have not been able to go for at least ten years now.

“There is a lot more to it now than there was before, it’s a real community hub for those close to it and long may it continue.”

Dionne McEwan, home manager at MHA Richmond said: “Henry was really proud when he was given his book and even though I was not there for the whole ceremony, my colleague Leah told me he was very happy.

“I was asked by the staff at MHA Hall Grange to keep it a surprise, and I am sure Henry enjoyed it.

“I think it’s a great initiative shown by the home and to give Henry a lasting memory of what the garden looks like is a nice gesture.”