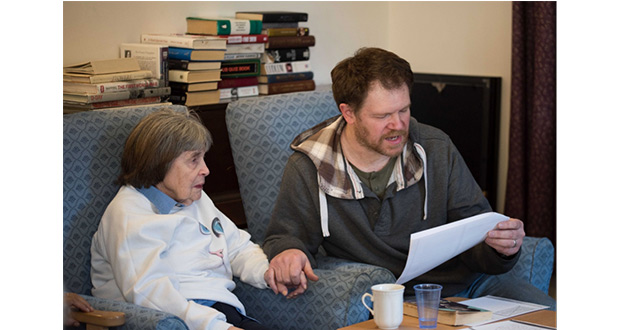 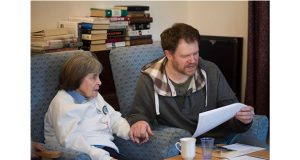 90-year-old Katharine is a resident at the care home and lives with dementia. She is widely known for her writing (under the name of Katharine Whitehorn), having earned a CBE for her services to journalism and she also wrote a regular column for The Observer for many years.

Bernard read excerpts from his mum’s autobiography ‘Selective Memory’, sharing tales of the time when she embarked upon her career in journalism. He also read extracts from his late father Gavin Lyall’s novel ‘The Secret Servant’ which was made into a BBC TV series.

Storytelling is a regular activity at Dell Field Court, run by local care provider and charity, The Fremantle Trust. It is beneficial as it encourages empathy, creativity and relaxation and is particularly helpful for reminiscence.

While Katharine finds it difficult to follow narratives due to the advancement of her dementia, the gesture on Bernard’s part not only helped to reconnect with earlier chapters of his mum’s life but invited residents and members of the team at Dell Field Court to have a richer insight into their family’s collective creative talents.

Commenting on the value of storytelling, Bernard said: “It’s how cultures define themselves – by their legends and myths, religious or otherwise.

“The novel is a relatively recent form, and filmed dramas even more so, but both are really serving the same purpose as Norse sagas, Aboriginal dreamtime myths, or Shakespearean plays – a society’s way of passing on to the next generation its idea of who it is, how to behave and what’s important.”

Fiona Swynnerton, leisure and lifestyle manager at The Fremantle Trust, added: “It was a real privilege to welcome Bernard to read to everyone, and to allow us a glimpse into Katharine’s formidable career in journalism.

“National Storytelling Week is a lovely opportunity to remind us of the power of sharing stories as they have a legacy that can go on through the generations.”