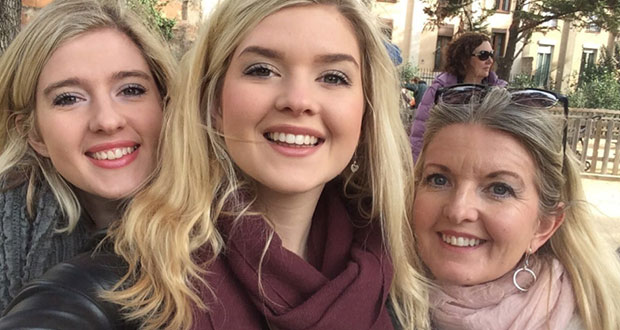 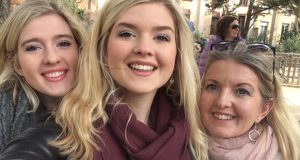 This Mother’s Day, Liz Ayre was treated to a luxury afternoon tea by her daughters Ciana, 21, and Chrissi, 19.

To this close-knit family, Mother’s Day is very important. After losing the girls’ father, Mike Ayre, in 2013, they made a vow to make the most out of life and appreciate every second together.

It was in 2008 that Liz learned that not only would she become a carer, but eventually a single mum.

Mike was diagnosed with early-onset Alzheimer’s disease at the age of just 46, and at the time Ciana was just 13 and Chrissi only 11.

It was a huge shock for the whole family – Mike had a highly successful career as an actuary working for several insurance companies across the globe, and was very fit and healthy.

In the years that followed Mike’s symptoms worsened, and Liz, now 52, battled to continue caring for Mike at their home in Budleigh Salterton, Devon.
He became more confused, and began having terrible seizures and hallucinations, and eventually became violent.

Fearing for her daughters’ safety, Liz was left with no choice but to allow Mike to be moved into a specialist nursing home for 24-hour care.

He died just five years later in 2013, with his family and their beloved dog Ziggi by his side as he passed away.

Ciana and Chrissi say they don’t know where they would be without their mum, who kept the family together while facing the painful process of losing her beloved husband.

And Liz is the proudest mother – both her girls are now at university and ready to make their own way in the world.

“The four of us had an amazing life together, so Alzheimer’s was not something we ever thought would be part of our lives, especially not while Mike was so young.

“When he was diagnosed, our world fell apart. It was devastating for us as a family but we stuck together and Mike and I made a promise to the girls that we would be open and honest with them about dementia and any questions they had about it. Sadly I didn’t always have all the answers.

“It was incredibly difficult to see the grief in my children as their dad slowly disappeared piece by piece from their fun-loving daddy into an empty shell, on top of grieving for him myself.

“It was being a mum to my daughters that kept me going after losing the love of my life. We got each other through that period in our lives.

“I’ve never been more proud to see them go off to university and start their own careers. Though a mum’s job is never done I feel that Mike would be so proud of the wonderful young women they’ve turned into.”

While Ciana is studying interior design at Kingston University, Chrissi is studying real estate and planning at the University of Reading.

“We lived in Vietnam for three years for Dad’s work which was an amazing experience and means, luckily, I have some fantastic memories of us all going on bike rides, travelling. We all love exploring.

“He was diagnosed 10 months after we came back. My parents were very open with us from the start. I understood that he would die.

“Mum coped for so long trying to look after all of us, but eventually it was just too much and Dad went into care.

“We were doing our exams and juggling school, revision and friendships while continuing to visit him was very hard. It was a 50-minute drive, which meant we could only see him on one weekend day. It was an exhausting, draining time. But mum kept us upbeat, and took us without fail every week.

“I wouldn’t have got through it, or be graduating university next year without her.”

“I remember the day my dad was diagnosed like nothing else. Mum and Dad had to sit my sister and me down to give us the bad news we had been hoping would never come our way: ‘Your dad is terminally ill with Alzheimer’s’.

“At this point, all I knew was that it was to do with memory loss and that at one point, Daddy would forget us. This is what needs to be changed. Alzheimer’s is much, much worse than just memory loss, it’s truly terrible.

“Each time he deteriorated more, it would feel like we were already grieving, as bit by bit we lost little pieces of him. At the end, he could do nothing – he couldn’t feed himself, dress himself, talk, walk or communicate with us.

“Despite the pain his death caused us, it was a slight relief to know that he was now in peace and no longer suffering.

“During this time, I honestly don’t know what I would have done without Mum. Losing my dad has made me realise how short life truly is, and that I should appreciate every moment. It made me realise how much I love my mum, and what a blessing it is to have her there for me every day.”

The family have been dedicated supporters of Alzheimer’s Research UK since Mike was diagnosed, and they are now known as ‘Champions’ of the charity – an accolade given to a handful of supporters in recognition of their outstanding efforts to help the charity beat dementia.

“There are 850,000 people in the UK living with dementia every day. Showing the faces of those behind the statistics not only raises awareness of the condition but also brings to the public’s attention the desperate need for new treatments.

“Current treatments help with the symptoms of dementia but there are currently no drugs to slow down or stop the diseases that cause the condition. Alzheimer’s Research UK is leading the charge to find new treatments and funding over £27million of research across the UK.”