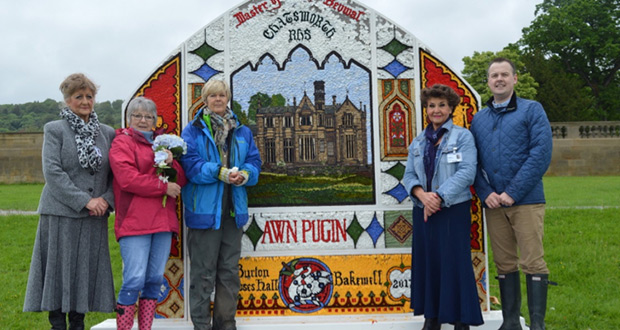 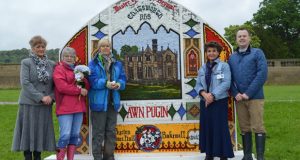 Over 90,000 visitors attended the show, when they were invited to cast their vote for their favourite welldressing design.

All entrants were asked to submit ideas focusing on “Design Revolutionaries”, with teams from Bakewell, Buxton, Ashford, Chesterfield and Tideswell selected for the final.

The trophy was awarded to the Bakewell team for their detailed design of Burton Closes Hall, in the heart of Bakewell, which is now operated as a care home by the Hill Care Group.

Architect Augustus Pugin, known for designing the interior of the Palace of Westminster, is the design revolutionary behind the building, constructed in 1848.

Burton Closes Hall has retained the majority of its original features, which include many of Pugin’s gothic revival stylings.

The well-dressing design is the creation of Sue Hudson who has continued the tradition of Bakewell welldressings along with sister, Christine Barks, following its revival by their father and horticulturalist A. J. Goudie in 1967.

Marking the golden anniversary of the town’s well-dressing revival, Sue and Christine lead a team of local volunteers in their creation for the RHS Chatsworth Flower Show.

Sue said: “It has been an absolute privilege to take part in the first ever RHS Welldressing Competition at the inaugural RHS Chatsworth Flower Show.

“We’re absolutely delighted to win Best Welldressing Exhibit, especially against such amazing designs from the other teams.

“The tradition of welldressing is very close to our hearts and one that we continue annually in Bakewell following its revival by my father A. J. Goudie over 50 years ago through the Bakewell branch of the Royal British Legion.

“We’re already looking forward to next year’s RHS Chatsworth Flower Show, when we hope to be invited back to present more of the exquisite works of A.W.N Pugin, situated in Burton Closes Hall.”

Carl J D Fisher, home manager at Burton Closes Hall Care Home, on Haddon Road, said: “The residents, staff and team behind the welldressing design are absolutely thrilled to have our care home at the centre of the Best Welldressing Exhibit at the RHS Chatsworth Flower Show.

“It’s testament to the hard work put in by Sue and her team that their stunning design was selected by the public as the best on display.

“The welldressing attracted a lot of attention over the five-day event, including from the Duke of Devonshire and President of the RHS Sir Nicholas Bacon, who have all been impressed with the attention to detail and craftsmanship.”