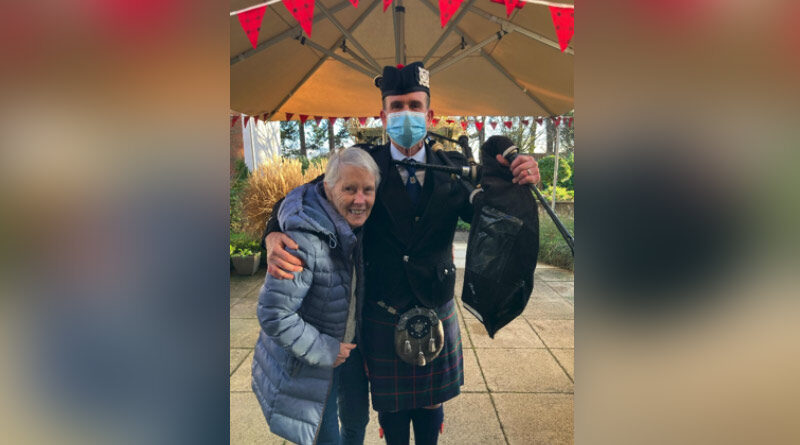 A resident at a Winchester dementia care home was treated to some rousing bagpipe music to help fulfil a wish on her ‘bucket list’.

Moira Pullen told carers at Colten Care’s St Catherines View that she would dearly love to take a trip to Scotland.

As a young girl, she spent many happy days playing outdoors while visiting an aunt and uncle living in the Highlands.

Companionship Team member Immy Fletcher said:
“Moira has very fond memories of holidays there every summer and told us of her wish to take a trip once again.

“Unfortunately, a flight to Edinburgh and the further travel to the Highlands would be a bit too much for Moira now.

“So we decided to bring Scotland to her.”

The timely prompt for all things Scottish was the celebration of patron saint St Andrew’s Day on 30 November.

Immy continued: “We started off Moira’s special day by hanging up bunting and decorations to get into the Scottish spirit and then iced some cupcakes.

“We used blue icing and added some Saltire flag cake toppers for decoration.

“We then moved onto colouring in pictures of Scottish flags and bagpipers to decorate the lounges and stuck them onto the windows.”
But the main event of the day was the visit all the way from Twickenham of professional bagpiper Cliff Hall, Pipe Sergeant of the City of London Pipe Band.

“He came in full dress and played some traditional Scottish music that we all recognised and could tap our feet along to,” said Immy. “Moira was absolutely delighted and especially enjoyed having her photo taken with him.”

The visit also brought back lovely memories for another St Catherines View resident who was brought up in Glasgow and went to university there.
She said: “As a fellow Scot, it was lovely to hear the bagpipes and some traditional music that I remember so well.”