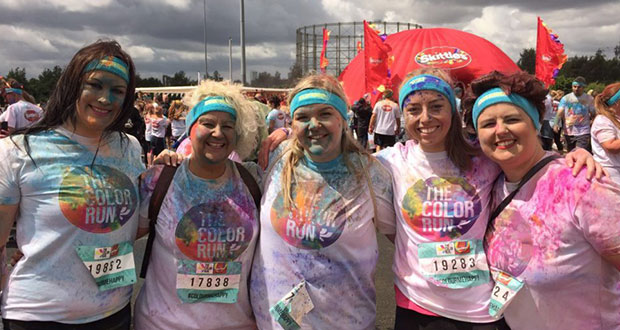 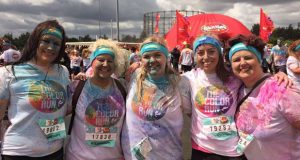 A group of dedicated fundraisers from AXA Insurance’s Bolton office have raised hundreds for Alzheimer’s Research UK, the UK’s leading dementia research charity, after taking part in a 5k race that saw competitors running through clouds of coloured powder.

Vicky Riley battled arthritis symptoms to cross the finish line of The Color Run UK in Manchester on Saturday (2 July), joined by her colleagues Katie Lambert, Nicola Braebaum, Jennifer Mitchell and Rachael Gregson. The workmates chose to fundraise for AXA’s charity of the year, spurred on by thoughts of loved ones who have been affected by dementia.

Staff from AXA Insurance have been raising money as part of a three-year partnership with the UK’s leading dementia research charity that began in April 2015. Employees from the firm’s head office and network of regional offices have already raised nearly £133,000 towards their £250,000 target with a range of fundraising challenges. The latest event saw Vicky and her four colleagues dress in luminous colours before being covered from head to toe in a rainbow of coloured paints during the 5k run. Together with a matched funding donation from AXA, the event added nearly £600 to the firm’s fundraising total.

Vicky, who divides her time between AXA’s Bolton and Lytham offices, explained:

Vicky Riley with a photo of her fiancé’s grandmother, Shirley Wolden, who died with dementia earlier this year

“Supporting Alzheimer’s Research UK has become a big part of life at AXA and we knew we wanted to do something for the charity – my fiancé’s grandma Shirley Wolden died recently with dementia, so it’s a cause that’s close to my heart too. I have arthritis, so it’s not easy for me to run and I’m not really able to do some of the big obstacle courses, but I thought the Colour Run looked achievable and really fun too. It’s billed as the ‘happiest 5k on the planet’, and we decided beforehand that we weren’t worried about our finishing time, we just wanted to cross the finish line and support each other.

“It was a really great day, there was an amazing atmosphere and when we arrived everyone was really revved up for the race. I felt unbelievable when I finished the race, although I really pushed myself towards the end and I’m still feeling the effects now! Everyone had a brilliant day, and now we’re all talking about what our next event will be. Mostly it was great to know we were running for such a good cause, it made it all worth it.”

“This is an incredible effort! We can’t thank Vicky and her colleagues enough for their support – the money they’ve raised will be able to help us provide vital resources and equipment for our scientists.

“Nearly 30,000 people are living with dementia in Greater Manchester alone, and with that number increasing we urgently need to find new treatments, preventions and ultimately a cure for dementia. At Alzheimer’s Research UK we rely on public support to be able to fund our pioneering research, so it’s thanks to people like Vicky and the team at AXA that we’re able to continue our work.”

To add to the team’s fundraising total, visit https://give.everydayhero.com/uk/curl-up-dye, or to learn more about Alzheimer’s Research UK’s work, visit www.alzheimersresearchuk.org or call 0300 111 5555.