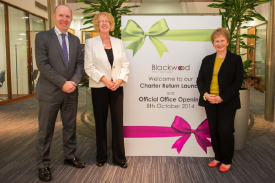 A wheelchair user, who has relentlessly championed improvements in housing to help disabled people live more independently, has been shortlisted for a prestigious award.

Lizanne Burton, who is both a tenant and a board member with Blackwood Housing and Care, is one of the nominees for the Chartered Institute of Housing’s ‘Women Achievers in Housing’ award.

Bosses of the Scotland-wide charity, renowned for its work in adapting homes so that people with disabilities or impairments can live as independently as possible, put forward the modest campaigner.

Fanchea Kelly, who took over as Chief Executive of Blackwood in 2013, paid tribute to Lizanne.

She said: “Lizanne is utterly selfless and incredibly modest – I’m not sure she realises how inspirational she actually is.

“Since I took on my role here she has been a huge help to me and the same is true for so many of our staff who are in contact with Lizanne on a daily basis.

“We are all extremely pleased she has been shortlisted for this award.

shortlisted her response was typically modest – she insisted she had not done anything to warrant it.”

Lizanne, has lived in Blackwood’s Craigevar development for more than 10 years and has been a long-term member of the Blackwood Scrutiny Panels, made up of tenants, who ensure the organisation is constantly meeting its own high standards.

Taking on the role of Foundation Board Member, Lizanne has been on the panel since 2005 and will celebrate her 10th anniversary next year.

She was closely involved in helping Blackwood when it moved Headquarters earlier this year, from the building in the west of Edinburgh it has occupied for more than 30 years, to new, purposed-fitted modern HQ in the city centre.

Along with another wheelchair user, Lizanne trialled a number of possible buildings to ensure the organisation chose the new HQ most likely to meet the needs of people with disabilities and impairments.

“I’m very honoured to be nominated for the award but still find it hard to believe it’s me that has been nominated.

“I’m very excited to also be attending the awards ceremony itself – and sure either way it’ll turn out to be a fantastic night.”