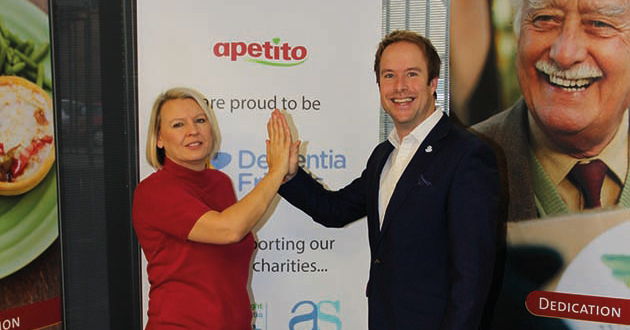 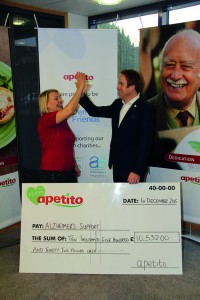 apetito, the leading food provider for care homes, hospitals and community meals services, has met its aim of raising £40,000 throughout 2015 for dementia charities – a month early!

This year marks the first time apetito has chosen charity partners and the total raised will be split between national charity, the Alzheimer’s Society, and locally based charity in East and West Wiltshire, Alzheimer’s Support.

Staff from across the company got involved in 40 fundraising events throughout the year, which ranged from a Family Fun Day at apetito’s Trowbridge headquarters, to a trek to Stonehenge, plus one intrepid team completed the Three Peaks Challenge.  To round things off, board members are set to complete ‘Velocity’ in Snowdonia on 14 December, which is Europe’s fastest and longest zip wire.

“I’m very proud to announce that we have already reached our ambitious target of raising £40,000 for these charities, which do such important work on a local and national basis,” said apetito Chief Executive, Paul Freeston.

“As a company, we work very closely with older and often more vulnerable individuals, and want to show our commitment to the work that the Alzheimer’s charities undertake in making a real difference to society.  As our ageing population continues to grow, incidences of dementia are sadly likely to increase over the coming years, making the work they do more vital than ever.”

First established in 1979, the Alzheimer’s Society is the UK’s leading dementia support and research Charity for those living with the condition, their families and carers.  The Charity’s activities include campaigning to improve public understanding of dementia and the devastating impact it can have.

Alzheimer’s Support is an independent charity offering support for people living at home with mild to moderate dementia, helping them to maintain as much independence and control over their lives as possible.

Jeremy Hughes, Chief Executive of leading dementia charity, Alzheimer’s Society, added: “I am delighted by the fundraising efforts of apetito to improve the lives of those living with dementia. I would like to thank all the staff that have climbed mountains, taken part in cycle rides and organised cake sales to support us.

“As a charity, we rely on the funds collected by our partners to carry out our vital work. In less than 10 years a million people will be living with dementia. The money raised will help Alzheimer’s Society to continue to provide indispensable services to people affected by dementia.”

Based close to apetito’s headquarters, Babs Harris, Alzheimer’s Support CEO, commented on the money raised: “The £10,000 raised by apetito will go a long way in our provision of services to people in Wiltshire, but there is so much more to our relationship with the company.  Both our organisations are deeply rooted in the local community and we’re excited about plans for closer collaboration in the future.”

In addition to ongoing fundraising efforts for both charities, apetito colleagues continue to benefit from access to its Staff Foundation programme, through which they can nominate community projects to receive grants from the company.  More than 350 initiatives have received grants through the Staff Foundation to date.