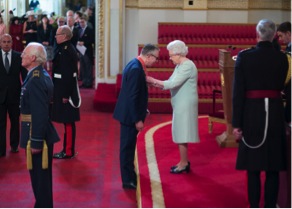 Jeremy Hughes, Chief Executive of Alzheimer’s Society, was presented with a CBE for services to older people by Her Majesty the Queen.

Jeremy has been Chief Executive of Alzheimer’s Society, the UK’s leading dementia support and research charity, since 2010.

During Jeremy’s time at Alzheimer’s Society, he has succeeded in significantly raising the profile of dementia among the general public, political leaders and on the world stage. Alzheimer’s Society endeavoured to shape the agenda for the 2013 G8 summit, which was dedicated to tackling dementia. One of the major outcomes of the summit was an international commitment to find an effective treatment or cure for dementia by 2025.

It was also during Jeremy’s leadership that the Prime Minister set his Challenge on Dementia which has already had a huge impact on dementia care, research and social inclusion for people with dementia. The next phase of this challenge was launched by the Government earlier this year and outlined current progress and further ambitions for 2020.

Jeremy has also steered a major shift in society’s attitudes towards people with dementia. He co-chairs the Dementia Friendly Communities Champion Group which works to develop dementia friendly communities – communities in which people with dementia are empowered to have aspirations and feel confident in the knowledge that they can participate in activities meaningful to them. Jeremy has also overseen the creation of Alzheimer’s Society’s Dementia Friends initiative, the biggest ever social action movement to change perceptions of dementia, which was one of the many reasons for the Society’s recent achievement of being named ‘Britain’s Most Admired Charity’ at this year’s Third Sector Awards.

Speaking about being presented with the award at Buckingham Palace today, Jeremy said:

‘I am honoured by this award and the recognition it gives to Alzheimer’s Society’s fantastic achievements. I am extremely proud of the advances we have made in increasing funding into dementia research which is vitally important to help people affected by the condition to live well today and find a cure in future. The fact that our Dementia Friends Initiative has led to the creation of over one million Dementia Friends across the UK is wonderful, and we look forward to reaching our target of 4 million Dementia Friends by 2020.

‘However, more still needs to be done to support the 850,000 people currently living with dementia. Investment in dementia research has increased but still sits at only 0.3 per cent of the £26 billion economic cost of dementia. We must also address funding for our social care system, which is in crisis and failing many people.

‘Alzheimer’s Society will continue to work hard to provide the best advice and support to anyone with dementia, and do all we can to enable those affected to live well.’

In addition to Jeremy’s role as Alzheimer’s Society’s Chief Executive, he is currently a Trustee of Sightsavers and Chair of National Voices, the umbrella health and social care charity.

Prior to joining Alzheimer’s Society, Jeremy has previously held the roles of Chief Executive of Breakthrough Breast Cancer and Head of External Affairs at the International Federation of Red Cross and Red Crescent Societies. His career in health and social care charities includes leadership posts at the British Red Cross, Leonard Cheshire, Muscular Dystrophy and NCH Action for Children.