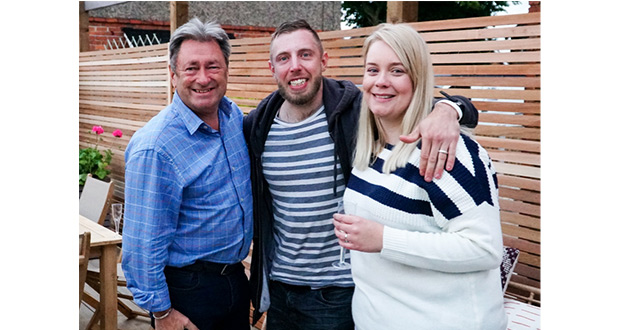 TV personality Alan Titchmarsh has announced his support for Alzheimer’s Society’s Memory Walk campaign, ahead of the release of the latest season of ITV’s Love Your Garden.

The first episode in the series features Daniel Bradbury, from Our Dementia Choir, who at 32 is one of the youngest people in the country to be diagnosed with Alzheimer’s disease.

In its 40th anniversary year Alzheimer’s Society is calling on everyone to unite against dementia and sign up to take part in a Memory Walk, raising vital funds to beat dementia. The Memory Walks take place right across England, Wales and Northern Ireland during September and October.

Alzheimer’s Society is committed to spending at least £150 million over the next decade on dementia research to improve care for people today and find a cure for tomorrow. Through the Society’s three Centres of Excellence, and as a co-founder of the UK Dementia Research Institute (DRI), the charity’s investments are powering discoveries to prevent, treat and care for people with all types of dementia, as well as helping us to understand how to keep the brain healthy.

As a landscape gardener, Daniel had long dreamed of being able to build a garden for his wife, Jordan, and their twins, Lola and Jasper. Diagnosed in 2017, Daniel has a very rare form of Alzheimer’s disease, inherited from his father who passed away in 1990, aged just 36. There is a 50 per cent chance that Lola and Jasper have also inherited the rare gene from Daniel.

As his dementia progresses, Daniel has begun to face increased difficulties with his mobility, speech and coordination, which led to Alan and the team stepping in to build the garden for him. Alongside the gardening makeover, the episode reflects on how Alzheimer’s has affected Daniel’s life.

Daniel, who got married last year, has shown a steadfast determination to live a full life and raise as much awareness of the disease as possible before it becomes too difficult for him to manage.

In the hour and a half that it takes to complete a Memory Walk, 30 people in the UK will get diagnosed with dementia. This year, the Bradburys have once again felt inspired to don their trainers and walk to support others who, like them, have felt the devastating effects of dementia.

Alan Titchmarsh, a long-time supporter of Alzheimer’s Society, was so moved by Daniel’s story that he announced his support of the Memory Walk season.

‘I loved working with Daniel and Jordan on this very special episode of Love Your Garden. A garden can help people living with dementia take part in physical activity and stimulate the senses and memories, all of which greatly improves their well-being.

‘Dementia is one of the biggest challenges that our society faces today – by 2021 there are set to be one million people living with it.

‘We knew that Daniel, as a landscape gardener, really wanted to build a garden for his family but was sadly no longer able to do so because of his condition, so we jumped at the opportunity to help.’

‘We have just heard that the Bradbury family are taking part in Alzheimer’s Society’s Memory Walks again this year, and, as a long-time supporter of the charity, I can only urge others to please, please join them and sign up to take part because I know it will make such a difference. We can change the future for all of us who may be hit by this devastating disease if we unite together to tackle it.’

The episode, which airs on 27 August at 8pm on ITV, boasts one of the most spectacular makeovers ever completed on the show, as the team create the ultimate modern family garden, including sensory planting and advice on how to create DIY play equipment for children.

‘We feel incredibly lucky to have met Alan and the team and watch Daniel’s gardening dreams come true before our very eyes. Working with Alzheimer’s Society, the team were able to make sure that the final result was able to accommodate Daniel’s needs, as well as giving Lola and Jasper somewhere spectacular to play in. I hope others enjoy watching our little garden get such a wonderful makeover as much as we did!

‘Our little family unit has overcome so much over the past few years, but the challenges are not about to stop there. Dementia is the UK’s biggest killer and we need to do more to raise vital funds for research into the condition.

‘This year, we are walking in celebration of Dan’s father, our twins and Dan, alongside everyone else who has been affected by this terrible disease.’

‘We can and will beat dementia, but I urge everyone who enjoys this episode to sign up and walk with us this year.’

‘Filming Love Your Garden has been a wonderful experience. I’m delighted that getting to know my story has encouraged Alan to support Alzheimer’s Society’s Memory Walks.

‘Someone develops dementia every three minutes and the sad reality is that dementia research still trails far behind other health conditions, after decades of underfunding.’

‘I am grateful to every one of you who have signed up to walk to raise the funds we need to beat dementia, and I can only encourage more people to sign up today, so that we can stop dementia once and for all.’

The campaign has attracted hordes of celebrity support this year. Vicky McClure, a close friend of the family, having attended Daniel and Jordan’s wedding and worked with Daniel on her acclaimed show, Our Dementia Choir, earlier this year, said:

‘For me personally the fight against dementia is more important than ever.

‘Losing my Nana to it and having made many great friends through Our Dementia Choir, just underlines the urgency for me of raising all the awareness and funds we can.’

‘Memory Walk is a great way to do this! I urge you all to sign up, donate and walk for a world without dementia.’