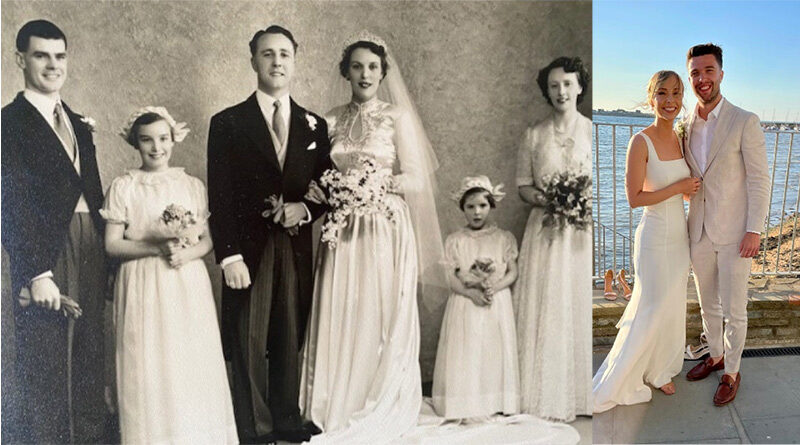 A CARE HOME resident’s wedding dress which was shipped from New York due to clothing rations in the 1950’s has made a 21st century renaissance at her grandsons’ wedding.

Unable to attend the wedding due to lockdown restrictions, Mansfield Care’s Belhaven House resident, Netta (Janet) Hastings, has shared a piece of her one-of-a-kind dress after part of the garment was sewn into the hem of her granddaughter-in-law’s wedding dress and floral bouquet.

Shipped over from the US in 1953, the satin dress travelled from New York to Kilmarnock as WWII clothing rations meant 95-year-old Netta couldn’t buy a dress in Scotland.

Sandra Hastings, daughter of Netta, said: “There were still rations at the time as the country was still recovering from WWII so finding a real wedding dress was unheard of. Crowds gathered just to see it.

“A gust of wind caught her veil and ended up landing on top of the roof. For most people that would’ve been it but everyone was so excited to see this dress and see the full ceremony that someone climbed onto the roof to retrieve it.

“It wasn’t just a wedding it was a special occasion for everyone so having a piece of the fabric in my son and daughter in law’s wedding is a bit of a legacy, seeing the dress move through generations.

Married to Alexander Hastings, an RAF pilot during the WWII, the Guinevere style dress was handpicked from a shop in Times Square by Netta’s sister, Margaret Proudfoot, who lived in New York at the time.

The dress fit Netta ‘perfectly’ despite only trying the dress on for the first time after it had made the 3,210 mile journey.

Sandra said: “It’s been great to have this piece of the past be a part of the present, and include Netta in the ceremony in such a symbolic way.

“I was a bit worried as Netta couldn’t come to my son’s wedding, but I think the staff at Belhaven House have made a real effort to celebrate the wedding and talk about how a piece of her was going to be a part of the occasion.

“It’s bringing in the past but moving it forward. I’ve saved a few pieces for the veil and for when my daughter gets married.”