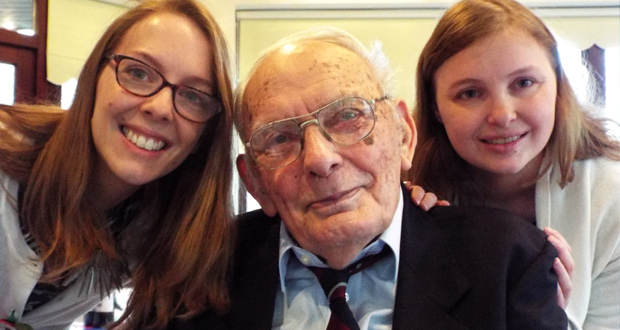 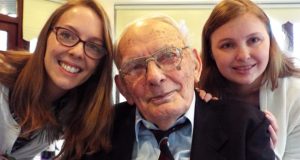 First established by Napoleon Bonaparte in 1802, the Legion of Honour is an award for excellent military conduct presented by the French Government. Allan Norman, formerly of the RAF Bomber Command Squadron, received the honour in recognition of his service efforts landing on the beaches of Normandy the day after D-Day and then throughout the Second World War in France, Belgium, Holland, Denmark and Germany.

Allan signed up to the Air and Sea Rescue Unit in Newhaven, before joining the RAF regiment as a Sergeant. The Legion of Honour rewards him for his actions as Sergeant leading his team through the Normandy beaches to defend the airfields of Normandy. Allan’s team were also responsible for rearming and refuelling aircraft and later in the war, assisting in the liberation of the Belsen concentration camp. Allan served in the RAF until 1948.

Allan was joined at Care South’s Sussexdown by Captain François Jean, French Honorary Consul who had the honour presenting the medal to him. Several members of Allan’s family also attended the presentation to celebrate his recognition, including his son and daughter in-law and two granddaughters who joined in the afternoon celebrations.

Captain François Jean presented Allan with the award, after which family, visitors and fellow residents enjoyed a light buffet lunch together – prepared and served especially by the home’s kitchen team.

Captain Francois Jean, French Consul, commented: “It must have been a very frightening experience for all involved. The Battle of Normandy went on for three months after D-Day and Allan would have certainly been right in the middle of it. It’s a tremendous honour to be celebrating this award with Allan and his family.”

Heather Rogers, Home Manager of Care South’s Sussexdown, said: “We are delighted that Allan has been recognised for his bravery and the part he played in the Second World War. I’m very grateful to the staff at Sussexdown and all our guests for taking the time to make this day as special as possible for Allan, his family and everyone at the home.”