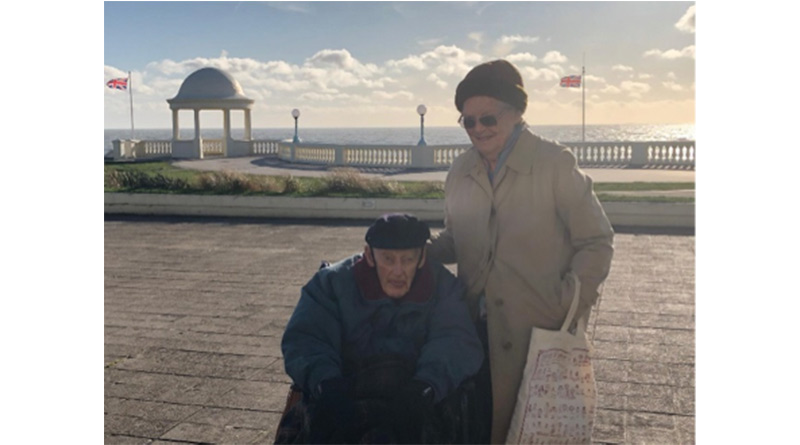 Richard Mockett, a resident at MHA Richmond care home in Bexhill-on-Sea, had just one wish – to see the sea one last time – and on Friday 17th January, staff at the home made his dream a reality.

On this brisk morning, Richard, his loving wife Joy, and two staff members from the care home ventured down to Bexhill-on-Sea’s coast for a complimentary afternoon tea provided by De La Warr Pavilion followed by a stroll along the promenade, with Richard in his wheelchair. He has been able to fulfil this dream as part of MHA’s ‘Seize the Day’ scheme.

Seize the Day was created by MHA, a national older person’s charity which provides care, accommodation and community-based support, with the vision of helping residents to live life to the full, no matter their age. Residents are asked what one thing they would love to achieve, and the initiative then helps that dream come to life.

Throughout Richard’s childhood, he always had a passion for the sea and loved nothing more than visits to the coastline – so much so in fact, that at a young age Richard built his very own boat.

He never forgot his love for the seaside and, after retiring at the age of 62, him and two other friends from the Rye Boating Club would go out on Richard’s boat to enjoy the sunshine and the waves.

During the Seize the Day outing, De La Warr ensured that Richard and his wife had a table overlooking the sea and Richard enjoyed a delicious cappuccino with a chocolate brownie on the house. The two then ventured outside where Richard sat and enjoyed listening to the crashing sounds of the waves.

Sue Quayle, staff member at De La Warr Pavilion, said: “I had a lump in my throat when talking to the staff members about Richard’s story, and I think it’s absolutely amazing how they went out of their way to fulfil this dream for him – we’re just glad we could help!”

Hannah Deeprose, Activities Co-ordinator at MHA Richmond who accompanied Richard, said: “It was a very touching experience for us to be able to fulfil Richard and his wife’s last wish. You could see in both of their faces just how much it meant to them.

“At MHA Richmond, we are always looking for new ways to help our residents live later life to the full, and the Seize the Day scheme is such a fundamental part of that.”

“We will continue to fulfil many more of our residents’ last wishes – thank you to our fantastic team of carers for making this possible.”