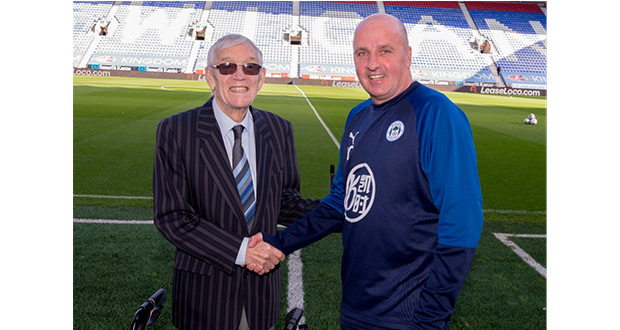 88-year-old former goalkeeper, Harold Lea, who played for Wigan Athletic during the 1940-50s, proved a lucky charm for his former club when he watched them from the front row of the West Stand as they secured a 1-0 victory over championship rivals, Nottingham Forest.

Harold was on a trip down memory lane, arranged by his home care provider, Belong at Home Wigan, and got a chance to meet with the team’s manager, Paul Cook, alongside current players, before kick-off to discuss football past and present. He shared stories from his career, which began at Wigan Grammar School Old Boys and came to an end at Stockport County.

Speaking of the day, Harold said: “It was a truly wonderful experience to be back on a football pitch, made even more special by the fact it was my beloved former club’s. I thoroughly enjoyed meeting Paul and the players, and was thrilled when they won! I cannot thank the Belong at Home staff enough for both arranging and accompanying me on this trip, and Wigan Athletic for providing us with the tickets. It has left me with memories I will never forget.”

Wigan Athletic manager, Paul Cook, added: “It was a pleasure to meet Harold and his family before Sunday’s game. We discussed the difference in the facilities from when he played to what they are now and how far the game has come from then. I know Harold was looking at all of the old team photos at the Stadium and recognised some of his former teammates. We also spoke about both playing at Stockport County, as well as for Wigan Athletic.”