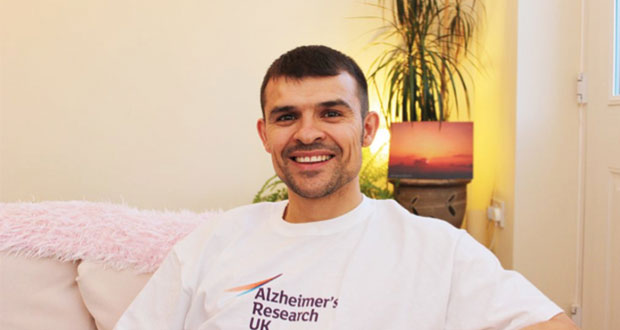 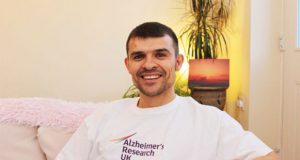 Father-of-three Chris Graham is ticking the infamous John O’Groats to Land’s End ride off his bucket list to raise awareness of the condition that has had a devastating impact on his family.

Alzheimer’s Research UK Champion Chris was diagnosed with early-onset Alzheimer’s in 2010 at the age of just 34.

He is now 41 and showing the early signs of Alzheimer’s. The disease claimed the life of his father at 42, grandfather at 46, auntie at 38 and cousin at 41. His elder brother is currently in a care home, bedbound and being fed through a tube at the age of 45.

Chris, who served in the army for 23 years before his diagnosis, carries a rare familial Alzheimer’s gene. This means his three children each have a 50 per cent chance of inheriting the disease too.

In 2015, Chris undertook a 16,000-mile bike ride around the coast of Canada and America to raise awareness of dementia, with incredible public support helping him raise more than £50,000 for Alzheimer’s Research UK. He went on to win a Pride of Sport award for his heroic efforts and was made a Champion of Alzheimer’s Research UK in recognition of his incredible fundraising efforts.

Chris is got back on his bike on May 14th to challenge himself to cycle the length of Great Britain solo while also flying the flag for dementia research. He hopes to increase his current fundraising total to £80,000 with this challenge.

“I like having something to work towards and I had been considering doing this for a while. It was also the perfect way for me to get fit and encourage people to talk about Alzheimer’s disease again, whether they know me or just see me during the ride.

“I want to raise awareness of dementia to help reduce the stigma around the condition and to raise money for research so future generations don’t have to go through what my family has been through.”

The father-of-three will set off from John O’Groats Guest House at 10am on Sunday and hopes to complete the ride in nine to 10 days. He is using a mapping app on his phone to navigate each leg of his journey and his wife Vicky will be helping to co-ordinate his trip including accommodation and stop-offs, from their home in Oxfordshire.

“Exercise always improves his concentration and being on the road on his bike keeps his mind active as he has to focus on where he is going, his surroundings and making sure his kit is in order.

“It’s a huge challenge to remember which bags go where when reduced cognitive function scrambles your memory but I will be on the line every pedal of the way to support him.”

She explained how the devastation could continue in their family without an effective treatment or cure.

“Chris and his brother are the third generation to be affected by this and without a cure there are five kids with a 50 per cent chance of developing dementia. The bike ride will give Chris a sense of freedom and achievement, this is his fightback not only for himself, the kids and his family but everyone else living with this condition.

“We have a two-year-old son and we want to watch him grow up together like so many other parents do. The only way to stop a fourth generation of our family being hit with this is to raise money for research that will lead to a successful treatment.”

“We were astounded by Chris’ plans to cycle 16,000 miles round the coast of Canada and America in 2015 and watched in awe as he finished the journey months early. We are delighted he is getting back in the saddle for us once again, and helping to improve public understanding around his condition during Dementia Awareness Week. We wish him and (his bike) Shirley the best of luck in his ride!

“We will be following him over every mile and hope people will get behind his incredible journey.”

Supporters will be able to follow his journey throughout the week using a virtual map on his Facebook page, Dementia Adventure: The Long Cycle Round along with regular updates including videos and pictures from each leg of his journey.