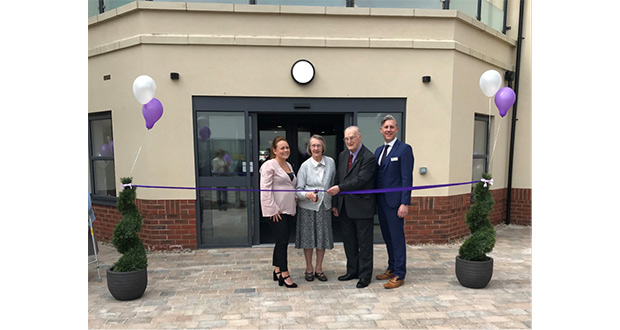 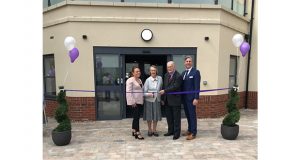 York’s newest care home, Handley House, launched today after a ceremonial ribbon cutting took place at the home, which has been named after the former Handley Page RAF aircraft repair station on which it is located.

The home’s operator, Ideal Carehomes, has invested £10million in the new site which has been built by sister-company LNT Construction. Providing 24-hour residential and dementia care for 66 residents in a modern and luxurious setting, it has also created 50 new jobs for local people.

Representatives from the Yorkshire Air Museum were invited to the exclusive VIP event along with 94-year-old Dorothy Harrison who worked as a payroll administrator at the base in the 1940s and now lives at Ideal’s sister-home Ebor Court in York.

The group formally declared the home open whilst remembering former workers who were credited with keeping hundreds of planes airborne during the Second World War.

Rachel, who has worked in the caring sector for 13 years, said “The team and I are absolutely thrilled to officially open the doors of Handley House for the first time and it’s an honour to have such a distinguished group of individuals help us cut the ribbon here today. Dorothy, John, Richard and Ian all have an incredible connection to Handley Page and we hope that they’re as pleased as we are to welcome in a new era for the site. Staff have been absolutely fascinated to learn more about its historical significance and we know that residents and their loved ones will take great pleasure in keeping this extraordinary wartime story alive as we go about our daily lives here in Clifton.”

Michael Gledhill, commented: “Handley House is a very special place and its location holds a unique place in history. It’s an absolute privilege to have our very first guests here today and it’s made us even more excited to officially open the doors to the local community at our open house days next week.”

Dorothy Harrison, 94, said “Today has been a whirlwind but it is amazing to see such a beautiful home standing on the site of the Handley Page factory which holds so many memories for me. I feel privileged to be part of the official opening, everyone has been so kind and welcoming. My father also used to work at Handley Page and I know that if he were here today, he would also be suitably impressed with the home.”