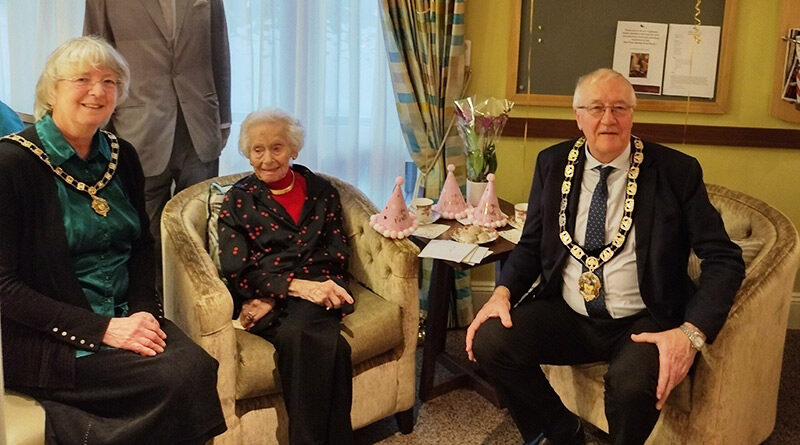 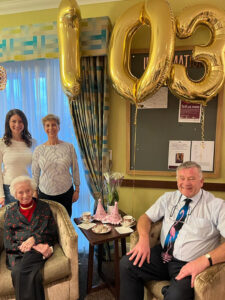 It was a momentous day as care home resident, Lore Lucas, celebrated her 103rd birthday with the help of her family and friends, royalty, and even a local dignitary.

To mark the incredible achievement, Lore was treated to a wonderful party at Signature at Elton House, in Bushey, where she enjoyed a range of delicious food, drink, and a fantastic birthday cake freshly prepared by the catering team at the care home.

Lore also received numerous cards from loved ones as well as flowers and plants as new additions to her much-adored windowsill garden.

There was an added buzz as the occasion also represented Lore’s first birthday since Covid-related Government guidance on restricted visitation ended, she relished the opportunity to celebrate with a wider group made up of her family and friends.

To mark such a momentous day, Lore and her fellow residents were surprised with a visit from local dignitary, the Mayor of Hertsmere, Cllr John Graham, who stopped by for a drink and a chat.

Born in Holland in 1920, Lore has lived an extraordinary life. She arrived in the UK in 1936 with her mother and sister and lived in London when the Second World War broke out in 1939. As was the case for many people, the war proved to be a defining period in Lore’s life. After the conflict started, her father suggested that she, her mother, and her sister, return to Holland so that they could be together as a family. For Lore however, she decided to stay in the UK, while the rest of her family returned to Holland as proposed by her father.

In this period she found happiness in an unsuspected place, meeting her future husband, Ronald, in London at a sandbag making party. While Ronald was enlisted in the Pioneer Corps, the two made sure to stay in touch whilst he was away serving. After the conclusion of the war, the two married in Glasgow in 1946, where she lived until she moved to Bushey over 70 years later in 2019.

During this time, she assisted her husband with running his business until he passed away, and was heavily involved in charity work, volunteering with the Women’s Royal Voluntary Service for over 20 years, and a notable supporter of Jewish Refugee organisations.

Her fantastic community contribution was recognised when Lore, aged 90 and still volunteering, was invited to the prestigious Royal Garden Party at Holyrood House in Edinburgh. Accompanied by her son, this was a fantastic moment for both, who thoroughly enjoyed the momentous day.

Asked what the secret is for living to such an impressive age, Lore Lucas said:
“It has to be bridge. If I could, I would play daily but usually I manage to get at least three games in per week. It is the food of life and better than any meal! Its not only great fun but helps keep me concentrated and my brain engaged.”

Speaking about Lore and her birthday celebrations, Karen Fleming, Client Liaison Manager at Signature at Elton House, added: “We were extremely happy to help Lore celebrate such a memorable occasion. We are all thinking of taking up Bridge so as we can also reach a great age like her!”