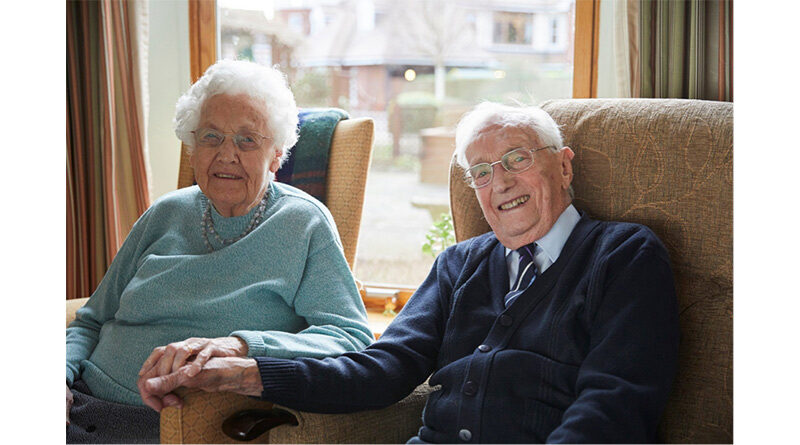 Harry and Sue Southern enjoyed a party thrown by the Tudor Coppice care home and will receive a special message from Her Majesty The Queen on reaching their platinum anniversary on Wednesday (12 August).

The couple, originally from Bolton, met on a rambling weekend in Derbyshire in 1947, shortly after WWII veteran Harry had left the Navy. They tied the knot on 12 August 1950 and had two children. Their family now live in America, where one grandson has followed in Harry’s footsteps by joining the Navy.

Sue, 93, said: “It’s been a very happy 70 years, but it doesn’t feel like 70 years! We’ve never been parted for very long in that time. We have inevitably had some ups and downs but we’ve never had any major upset. We’re just good for each other.”

Harry, 95, said: “I remember our courtship days before we were married. I remember bumping into her in central Bolton. She was clutching a box, and in the box as a kitten that was being taken to a vets. We’d only met two or three times at this stage. She stopped and I was immediately struck by the fact that she was blushing! I can see that scene now as clearly as if it was three days ago. The chemistry just seemed to work. We knew really early that we were right for each other.”

Sue added: “We’re good for each other, we look after each other.” Asked if there was a key to a happy marriage, she said: “Harry’s favourite saying is ‘The one with the most sense gives in first!’ My advice to is have patience.”

The couple live at Royal Star & Garter, and the Home arranged for an afternoon of classical music with other residents and staff to help celebrate the day, along with bubbly and cake.

Speaking there, Harry said: “It been a wonderful 70 years and the last 18 months living at Royal Star & Garter have been as good as any other. The care we have received during this unique time has been second-to-none.”