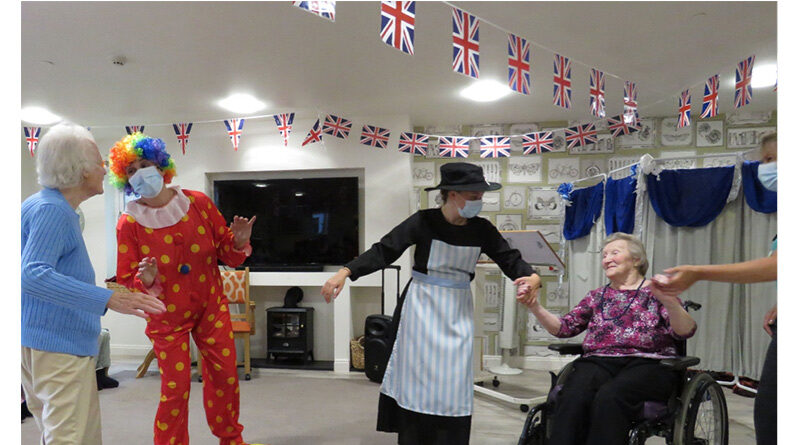 South coast provider Colten Care found a host of ways to celebrate the universal joy and power of music, bringing smiles and positive vibes all round.

Residents at Belmore Lodge in Lymington stretched their arms for a fun workout drumming on exercise balls to the rhythm of the 1961 Dion hit The Wanderer.

Those living at Outstanding-rated Woodpeckers in nearby Brockenhurst took part in a closely fought musical bingo tournament featuring lyrics from favourite pop songs.

And all four of Colten’s dedicated dementia care homes got in on the act too, staging musical experiences for residents.

It featured Companionship team members Anne Marie Knight and Megan Fletcher dressing up and performing the Judy Garland song A Couple of Swells and the signature tune from the film Chitty Chitty Bang Bang.

In a karaoke session, residents at St Catherines View in Winchester sang and played percussion instruments while The Aldbury in Poole held a name-that-tune competition.

Among other homes, Braemar Lodge in Salisbury invited residents to join the global dance challenge prompted by the success of the song Jerusalema by South African DJ and producer Master KG.

And while singer and Companionship team member Rebecca Osborne performed ‘a musical trip around the world’ at Outstanding-rated Amberwood House in Ferndown, residents at Avon Reach in Mudeford enjoyed a trip down memory lane with music hall songs and reminiscence.

Voices and playing from all 21 Colten homes in Dorset, Hampshire, Wiltshire and West Sussex are represented in a new music video celebrating their creative talent.

It features a special arrangement of Barry Manilow’s song One Voice by Colten’s Music and Arts Partner Fiona Pritchard.

Opening with a solo from Kirby Sharp, a Healthcare Assistant at Abbotts Barton in Winchester, the video includes cello, flute, violin and guitar as well as singing.

Fiona said: “Some of the singers and players may have been nervous beforehand but everyone finished their parts with laughs and smiles. There was a real sense of achievement and positivity as with all our Music Day activities. The homes came up with such a wide variety of ideas to celebrate the occasion, all supporting our residents’ wellbeing.”

Jo Gough, who lives at St Catherines View and is shown in the One Voice video in the role of conductor, said of her experience: “It’s wonderful, it’s beautiful.”