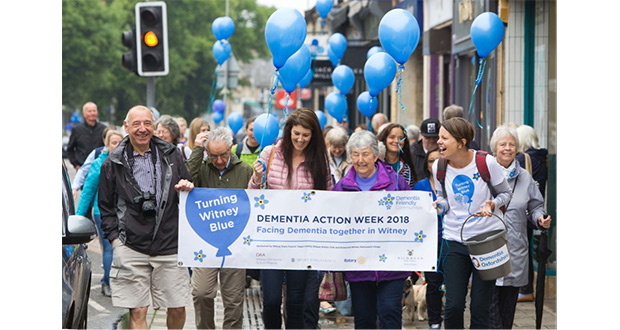 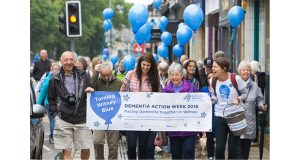 Over 230 shops and local businesses supported Turn Witney Blue for Dementia Action Week, and by creating special blue window displays and covering the town with blue balloons and posters, a real sense of community support was achieved.

A full programme of special events included over 80 people living locally with Dementia enjoying a free screening of Sing Along to the Sound of Music at Cineworld Witney, while a further 50 people attended Witney’s first Dementia-friendly church service at St Mary’s Church.  There was great support for the Golden Memories Walk through the town which raised over £650 for Dementia Oxfordshire, while The Batt School in Witney also ‘went blue’ for the day with pupils wearing blue and holding a cake sale generating a further £340.  A ‘tug-of-war’ fire engine-pull and a Tea Dance with over 100 joining in were held at Richmond Witney retirement village attended by local MP Robert Courts.

Commented Suzi Morgan, chair of the Witney steering group and a village adviser at Richmond Witney:

“It was a superb effort by so many people, and I’d like to thank everyone so much for supporting Turn Witney Blue for Dementia Action Week 2018.  It was a wonderful week for raising awareness, taking action and raising funds.  We would particularly like to thank every organisation and business that supported us by turning blue, hosting events or donating, and especially our sponsors, Witney Town Council, Witney Rotary Club and Richmond Villages.”

She added: “We now know that one in three people born in 2018 will go on to develop dementia in their lifetime and so every action we take matters.  That action might be an organised fund-raising event to increase awareness about dementia or, an investment in dementia research; or it might simply be knowing that by giving someone living with dementia a little extra time in a queue as they shop, you can make a world of difference to their experience of well-being.”