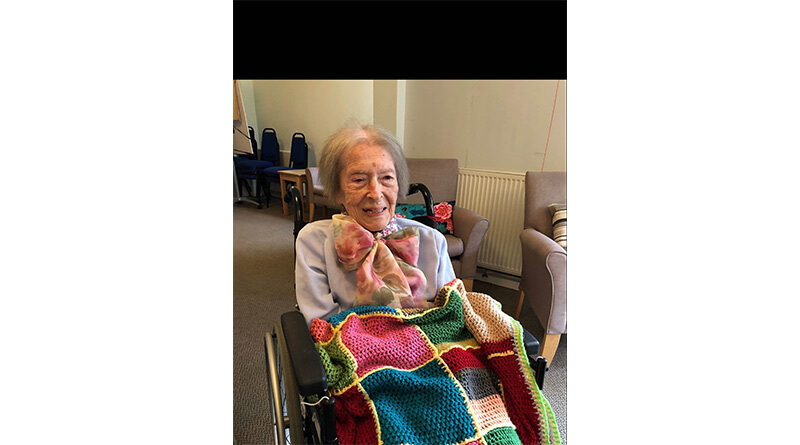 A resident at Home Close care home in Fulbourn, has marked her 100th birthday with a special celebration at the home.

Jean Fordham has been living at Home Close since March this year, and reached her milestone birthday on Sunday 18th October.

Jean grew up in Bolton alongside her older sister, Emmie, both of who were adopted by Dr Marshall who they called ‘Aunt Jean’.  She was educated at Ackworth School, a Quaker boarding school in Pontefract, followed by a short spell at a finishing school in Switzerland. She later returned to Bolton to help in the doctor’s practice before training as a teacher in London.

During wartime, Jean accompanied young evacuees from south-east London to large country houses in Kent, where she lived with them for weeks at a time. She later began a teaching career at a nursery school in Bolton.

On May 4th 1944, she married pilot, John Ellis Fordham. After the war, John studied modern languages and in 1947 they spent some time in Paris as part of his course, before moving to the Loire Valley. Jean and John had two daughters, Anne and Jane.

Jean and John moved around England with his work, and she latterly worked as a special needs support teacher in Waltham Forest, London, working with children with a range of needs, whom she kept in touch with for years afterwards.

John was tragically killed in a road accident in January 1989, so Jean moved to Shenfield then to Cambridge to be near her younger daughter Jane.

Jean has four grandchildren and five great-granddaughters, and when her daughter Anne retired, she discovered Jean also has two half-sisters and many cousins, one of who has become a close friend and a regular visitor to Jean. She greatly enjoys reading poetry and listening to music, and loved to travel in her younger years.

To mark her special birthday, staff at Home Close arranged a special party with her fellow residents, she was visited by family in accordance with Covid-safe restrictions and was delighted receive a card from Her Majesty, the Queen.

Manager of Home Close, Samantha Humphries said: “What an incredible life Jean has led; it’s been fascinating hearing the wonderful stories of her childhood, her travels with her husband and her teaching career.

“It was very special to be able to celebrate her 100th birthday, surrounded by her friends at the home, and we made sure we followed health guidelines to allow her family to visit safely. It was a joy to share this special occasion with her and from everyone at Home Close, I’d like to wish Jean a very happy birthday.”

Home Close is part of the Healthcare Homes Group and is based on Cow Lane in Fulbourn.  For more information on the range of services provided, call 01223 880233 or visit www.healthcarehomes.co.uk.