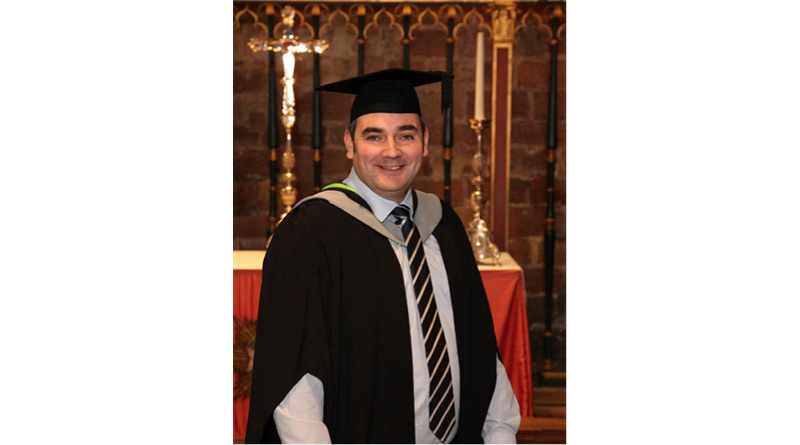 A nursing graduate admitted he had no regrets and he wished he’d changed career years ago at his graduation this week.

Derrick Tyson, 36, from Barrow, graduated as a mental health nurse at a ceremony held in the opulent surroundings of Carlisle Cathedral on Wednesday.

It turned out to be a double celebration for Derrick who was awarded the Gordon Neil Prize for nursing, for the highest scoring student across all nursing programmes.

Before swapping to mental health nursing, Derrick was a serving solider in Grantham, Lincolnshire and it was during preparation for deployment that his interest in mental health was peaked.

“I was in the Army for several years, deployed on operations across the world. As part of those deployments we were trained as trim practitioners,someone who was able to assess colleagues and peers’ mental health if they had experienced an incident overseas on deployment.

“That peaked my interest in mental health and as I was coming towards the end of my time as a soldier, I was looking for other options and came across mental health nursing and was fortunate enough to get a place at the University of Cumbria.They took a chance on me and the rest his history.”

“I wish I’d done it years ago. Couldn’t picture myself doing anything else.”

Derrick is working in his dream job at Furness General Hospital, on the Dova Unit, an acute inpatient mental health unit.

“The mental health team are absolutely delighted that Derrick has been awarded the Gordon Neill prize.

“Derrick decided on a career change after spending a number of years in the military and we are very glad he chose to study with us at the University of Cumbria.

“He has shown consistency across the whole three years in terms of his academic work which has been a great pleasure to read.

“Not only that, but his knowledge and understanding is also evident in his professional practice. We are extremely proud of his achievements.”

This award was originally given to the best nurse of the year who trained at Cumberland Infirmary and has since transferred to the University of Cumbria.

Gordon Neill was a surgeon at the Cumberland Infirmary and on his death in 1952 his father set up a Trust Fund in his memory from which the prize originates.