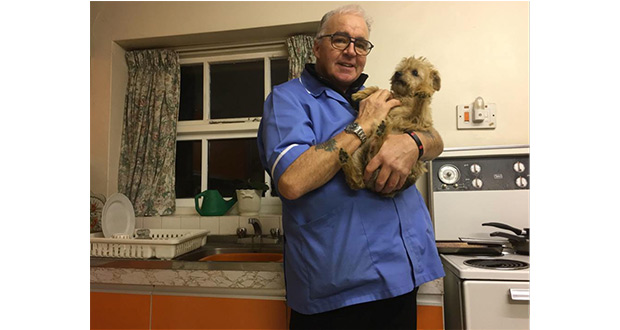 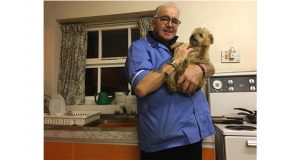 A Care Worker at a Worcester based supported living company has enabled a service user and his pet to stay together in their own home after ‘em-barking’ on a firm friendship with Sally the dog.

Garry, a Care Worker at Radis Community Care, struck up a bond with Sally after providing support to her human Dad, Peter.

Garry, commented: “Sally is Peter’s fifth dog and so animals have had a major role in his life. Peter lives on his own and Sally’s companionship is very important to him.

“As with other people I visit, they light up when pets are in the room. Carers play an important part in keeping people at home with their beloved furry friends, but the joy they get from their pets – the companionship and unquestioning love, is often the best medicine they can get.”

The duo share many happy times together and Garry even looks after the health needs of Sally by applying cream to her underbelly to tackle her scratching.

He adds: “Sally is a real character. She hovers around me for three small treats and woe betide if you forget, as Sally barks loudly until she has received them. She also expects a share of a cuppa from my teacup, as she knows I take sugar. She is loved by the whole care team.”

Garry has been working at Radis since February 2018. After being told six years ago by other care companies that ‘most people didn’t want males going into their homes,’ he is now glad that the climate has changed and the demands for care at home continues to grow.

He adds: “For the first time in many years I get up looking forward to the working day. I come home each day feeling like I’ve made a difference and helped people to continue living at home where they want to be.”