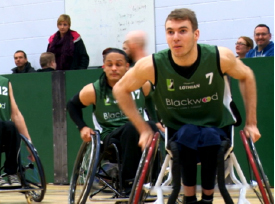 Scotland’s number one wheelchair-basketball team has received sponsorship from a leading housing and care provider.

Lothian Phoenix, who were promoted this year to the first division, will now compete in the league with the support of Blackwood Housing and Care.

Colleen Robertson, Communications and Marketing Manager for Blackwood, is thrilled to announce the sponsorship.

She said: “Blackwood is delighted to be the official sponsor for Lothian Phoenix and we were excited to see the first home game on Sunday to cheer on the team.

“Here at Blackwood we try to encompass innovation with care and the team are definitely first-hand examples of this.

“Lothian Phoenix represents a team of opportunity – the players have overcome adversity to achieve something truly spectacular and we could not be more proud to support them.”

Formed in 2006, the club enables individuals with physical disabilities the opportunity to participate in a competitive sport. The team is coached by Tina Gordon who has been involved in the sport for more than 35 years.

Tina is equally delighted to have Blackwood sponsor the team, and is looking forward to continued sporting success.

She said: “To have such a respected housing and care provider support us is fantastic.

“The team could not be more grateful for the new kit and are looking forward to playing the season in style – thanks to Blackwood.

“Sunday was a fantastic day for the team after achieving a winning result and we are definitely looking forward to many more victories.

“Lothian Phoenix has a real family feel to the club from our junior development programme through to senior division one squad.

“The club is growing all the time and several of our members are also breaking into the Scotland and GB training squads.”

The club’s ethos fits in entirely with Blackwood’s recent innovation overhaul – and focus on combining technology with care, to improve quality of life.