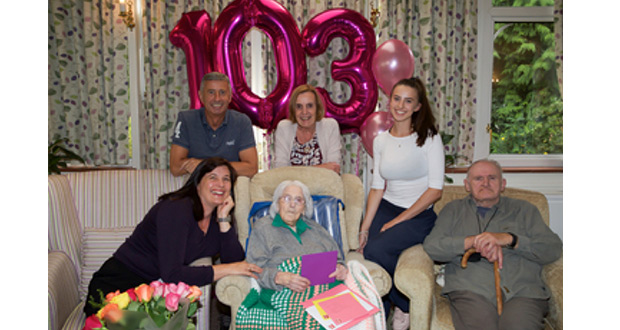 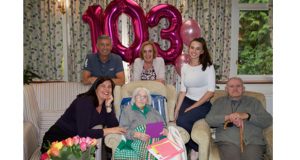 A popular Westerham care home resident is celebrating her 103rd birthday with family and friends at a special event held at Westerham Place, which is part of Wren Retirement Living.

Dorothy Greenfield is the guest of honour at the party, which has been organised by staff at the Kent-based care home, and which will feature a musical performance.

Dorothy is being treated to an afternoon of tea and cakes, as well as being entertained by local singer Joe Phillips. She is being joined by fellow residents and guests, including her son, daughter-in-law, granddaughter and great-granddaughter.

Dorothy was born in Pinner, Middlesex on 18th September 1914, she was the third of six children.

Dorothy met George Greenfield, a young airman, at Pinner Fair. They were married in January 1939. She followed him to Ontario, Canada, where he was posted during the war, and in 1943, they had a son, David.

When George retired from the RAF in 1968 he and Dorothy moved to Sussex and had a Bungalow built, which they named ‘Gedo’. They were visited there by their family until 1997, when George passed away.

Dorothy moved into Westerham Place, and holds a party every year for her birthday. She has told the care staff at the home that she looks forward to receiving another telegram from the Queen when she reaches her 105th birthday.

Claire Davis, Home Manager at Westerham Place, said: “Dorothy is a lovely resident and we are delighted to celebrate her special day in style. She is a very popular resident with staff and her fellow residents, and we all know her well as she has been part of the Westerham family for more than 20 years.

“We are looking forward to hosting further community events and celebrations at Westerham Place, and would like to wish Dorothy all the very best on her 103rd birthday!”