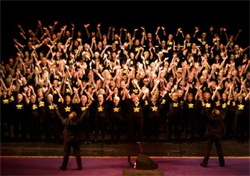 More than 300 members of Rock Choir, the UK’s largest contemporary choir, will take to the Cambridge Corn Exchange stage on Saturday 28 June in support of Alzheimer’s Research UK. A collection will be held following the two performances as well as a raffle – including a UK holiday as top prize – with all donations going to the charity.

Based in Great Abington, Alzheimer’s Research UK is the UK’s leading dementia research charity, specialising in finding preventions, treatments and a cure for dementia.

The singers from the Cambridge, Huntingdon and St Neots branches of Rock Choir will be joined by West End star Linzi Hateley who is famed for her roles as Roxie in Chicago, Eponine in Les Miserables and Donna in Mamma Mia.

Rock Choir is a unique, contemporary choir made up of singers of all ages and experience with 16,000 members across the UK. Since it was formed in 2005 by Caroline Redman Lusher, the choir has appeared on BBC Breakfast, The One Show, This Morning and even starred in its own ITV1 documentary ‘The Choir That Rocks’.

Rock Choir is a national organisation with groups meeting across the UK once a week for rehearsals to sing well-known hit songs. Members don’t have to pass an audition and they don’t have to be able to read music – they just need a passion for singing!

Speaking about the event, Carrie said:

“This is one of the biggest local events for Rock Choir. Last year some of the members from the Cambridge, Huntingdon and St Neots branches joined other Rock Choir members from across the UK to perform at the O2. I wanted to match that on a regional level and the Cambridge Corn Exchange is just perfect.

“We are supporting Alzheimer’s Research UK as many of my members have family and friends affected by Alzheimer’s disease and other forms of dementia. We want to use our passion for singing to raise vital funds for dementia research and ensure the audience has a good time.

“We sing contemporary rock, pop and Motown – anything from Bruno Mars to Adele. The audience can expect an eclectic line-up but they’re all songs they know and love. Linzi Hateley will be singing songs from her musicals as well as performing with the 300 Rock Choir members.”

“We are very excited that Rock Choir is supporting Alzheimer’s Research UK and are very much looking forward to this fabulous event at Cambridge Corn Exchange.

“There are hundreds of thousands of people across the UK living with Alzheimer’s disease and other dementias today, including over 7,500 people in Cambridgeshire. Research is vital if we are to find treatments capable of stopping the disease in its tracks.

“We rely on public donations to fund our research, which is why we are so grateful to Rock Choir for supporting us by holding a collection and raffle at the shows to boost our vital funds.”