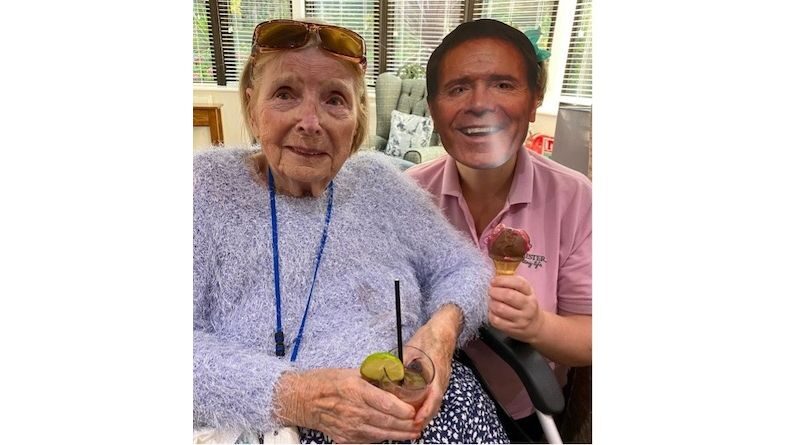 Residents and staff at care home in Ashcombe House in Worting Road were taken on a virtual cruise for their ‘Summer Holiday’ when the home threw a party to celebrate Sir Cliff Richard’s birthday on October 14. Born Harry Webb in 1940, Sir Cliff Richard has sold over 250 million records worldwide making him one of the best-selling music artists of all time.

The celebrations started with a virtual cruise and interactive cookery demo taking in some mocktails, exotic dishes and mystery destinations courtesy of chef, Paul Hawkins, and Lisa Richards from Unilever’s Away from Home team which supports the care sector.

Chef Paul whipped up some tasty treats in a live, interactive cookery demo.  As they pulled into each port on the cruise, residents were given clues to identify where they were visiting and then Paul created a typical dish from that country for everyone to taste.

Paul said “It was an absolute pleasure to be able to prepare these dishes for the Barchester residents and even more so because they got to taste them, despite my not being able to be there in person. Thanks to all the chefs in Barchester homes across the country who supported me to deliver this really lovely activity.”

The celebrations continued with entertainment by Anthony Allgood singing Cliff Richards hits through the years.

General Manager, Louise Lambert said: What a wonderful day of celebrations and entertainment we had a delicious afternoon with Mocktails in hand virtually cruising with Paul and Lisa from Unilever, then singing entertainment for Sir Cliffs Birthday, it is amazing how many songs he has recorded I even surprised myself by how many i remembered!”