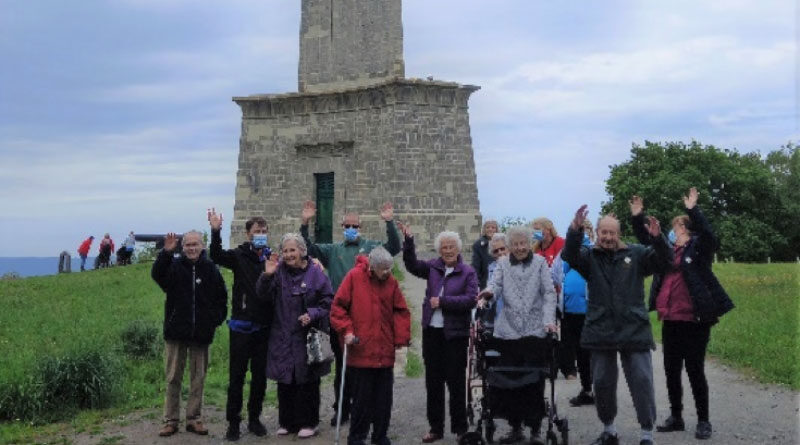 Two Wellington care homes teamed up to arrange a special outing as part of their activity programmes for Dementia Action Week (15-22 May) treating residents to a trip to see the recently restored Wellington Memorial and learn about its history.

Residents from Camelot House and Lodge and Oaktree Court were given a guided tour John and Jo Greenshields, senior Wellington Monument volunteers For the National Trust, who wowed visitors with their in-depth knowledge of the Duke of Wellington and the landmark obelisk.

John Greenshields said: “Some could remember being given a candle to light their way up and having picnics and gatherings on the grass, one person remembers being proposed to there. Remembering the past has a great effect on the wellbeing of people and that was definitely apparent.”

Special permission was granted by the National Trust for the homes’ minibuses to drive up close to the monument to enable access by residents with mobility issues: the site is otherwise a 500m walk from the car park.

“We have a view of the Blackdown Hills with the monument on the skyline from our home, and people were amazed by how tall it was when we got up close – 175 feet is really tall!

“While there are many things people living with dementia are no longer able to do, outings like this are all about helping them focus on what they can do – a vital ingredient in living well with dementia – so we thought this would be a great way to mark Dementia Action Week.

“And these kind of outings have been missed so much during the last couple of years – it’s clear that our residents are really enjoying being out and about again now.

“The residents from both homes also really enjoyed the chance to make new friends and big thanks to Nicky Perry from Oaktree Court for her part in arranging the day.”

The team responsible for the Wellington Monument restoration project has been awarded a ‘Highly Commended’ at the 2022 Museum and Heritage Awards in the category of ‘Restoration or conservation project of the year,’ reflecting the skills of the masons, architects and others involved in the restoration project, and the invaluable support of local fundraisers and volunteers.

Both Camelot House and Lodge and Oaktree Court contributed to the fund for the upkeep of the Wellington Monument which is managed by the National Trust.

The striking landmark stands as a tribute to the Duke of Wellington and his victory at the Battle of Waterloo and its prominent location on top of Wellington Hill has led to it becoming a symbolic marker on a journey within the local area and to the wider South West, see www.nationaltrust.org.uk/wellington-monumient