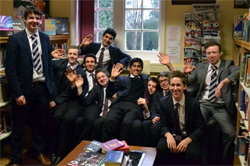 Pupils from a school in Northamptonshire are swapping their classrooms for the wilds of Morocco to boost funds for Alzheimer’s Research UK. The group of 15 pupils and two teachers from Wellingborough School will leave home soil on Monday 17 February ahead of a gruelling three-day trek across the Sahara Desert. The intrepid trekkers have already raised over £10,000 through sponsorship for the UK’s leading dementia research charity.

The boys’ amazing adventure will take them to the largest desert on the African continent, which stretches from the snow-capped mountains of Morocco in the west, to the Red Sea coast 480km to the east. After flying into the desert town of Ouarzazate and spending a night at a hotel, the group will head off on a three-hour drive to their start point. Accompanied by local guides and camels to carry equipment, the group will trek 50km through open desert, past imposing mountains, along riverbeds and under palm trees. The boys, aged 14-17, will walk through searing heat and camp among the desert hills and sand dunes during freezing cold nights.

It will be the second time pupils from Cripps’ House – one of five boys’ houses at Wellingborough School – have taken on the desert challenge to raise funds and awareness for dementia charities.

Keith Hargreaves, the Housemaster of Cripps’ House, said:
“The trip is very much a growing experience for the boys. They get to visit a country with a unique culture while also being able to feel good about raising money for such a worthy cause. A boy from every single trip we’ve organised has gone on to be Head of House or Head of School because it increases their level of maturity.

“Last time we were in Morocco in 2010 we had a month’s worth of rain in 24 hours – there were rivers where there were meant to be roads. It also became very windy but there were periods of immense sunshine on the dunes. It’s important at their age to be challenged and to experience different cultures.”

He added:
“Alzheimer’s disease and other forms of dementia will affect us all in some way or another in the coming years, if not already, and the only way to fight it is through research. That’s why we’re supporting Alzheimer’s Research UK. It’s an appalling disease that not only robs people of loved-ones but also their memories of that love.”

Jodie Vaughan, Community Fundraising Manager at Alzheimer’s Research UK, said:
“We wish the pupils and staff at Wellingborough School every success with their trek. Every £20 they raise is enough to pay for another hour of research, bringing us closer to finding ways to diagnose, prevent, treat and cure Alzheimer’s disease and other forms of dementia.

“There are hundreds of thousands of people across the UK living with dementia today, including over 7,000 people in Northamptonshire. Research is the only answer but funding still lags far behind other serious diseases. We rely on wonderful supporters like the pupils and staff at Wellingborough School to fund our crucial research.”